Big Society Capital today published its 2015 Annual Review, outlining the growth and impact of social investment across the UK.

Its new report highlights that by the end of 2015: 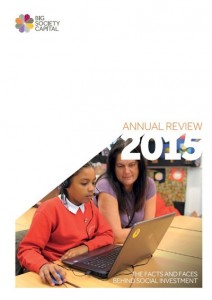 The amount of money signed and available to charities and social enterprises rose to £587 million, across 48 different investments. Nearly a fifth (19 per cent) of Big Society Capital’s co-investors are UK charities and foundations.

The report highlights the impact of investment in key areas such as community, employment, training and education, and housing, with investments now reaching over 270 charities and social enterprises. Big Society Capital has also revealed that early findings from its stakeholder survey show that nearly 70 per cent of people believe it is having a positive impact.

Cliff Prior, Chief Executive of Big Society Capital, said: ‘Our job is to make sure that charities and social enterprises can borrow the money they need to do more of their wonderful work. It’s great that we are now reaching nearly 300 organizations, and all credit to the teams here, in the social investors, and in the charities and social enterprises. But we know that there are many more social organizations that could benefit. Working from the ground up with the social issues and the people trying to solve them, will mean we can see where and how social investment can play its part. We want to reach a point where social investment can be a valuable and readily accessible tool in the toolbox of every charity or social enterprise.

I’m also looking forward to getting more people involved in social investment, so that the public can invest in the things they care about. By developing new approaches like this, we can make social investment more relevant, and achieve more of the social benefits we all want to see.’