Bill and Melinda Gates announced Monday they were divorcing. The two have reshaped philanthropy and public health with their fortune, and together they run one of the largest private foundations in the world.

In identical statements posted to Twitter, both said they would ‘continue our work together at the foundation, but we no longer believe we can grow together as a couple in this next phase of our lives.’

No changes at the foundation

The Bill and Melinda Gates Foundation said in a statement shortly after the pair’s announcement that both Bill and Melinda would remain co-chairs and trustees and that no changes were expected at the foundation. 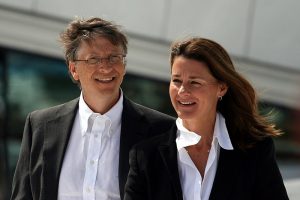 ‘They will continue to work together to share and approve foundation strategies, advocate for the foundation’s issues and set the organisation’s overall direction,’ the statement read.

The Gates Foundation has an endowment of just under $50 billion, annually spends around $5 billion, and employs over 1,600 people. Its influence, which was already great, has only grown during the Covid-19 pandemic, as the Gates Foundation has poured support into global health initiatives, vaccine development, and pandemic relief, making them indispensable to the world’s effort to fight the health crisis.

All of the foundation’s wealth, personnel and power is controlled by its three trustees: Bill, Melinda, and Warren Buffet.

‘It’s hugely uncomfortable that a private issue could have such impact on the sector,’ said philanthropy historian Benjamin Soskis on Twitter. ‘But this is why major foundations shouldn’t have tiny boards, made up entirely of donors, family, close friends. There’s no insulation between the private and public.’

One more point on the Gates divorce. It's hugely uncomfortable that a private issue could have such impact on the sector. But this is why major foundations shouldn't have tiny boards, made up entirely of donors/family/close friends. There's no insulation btw the private & public.

The thought was echoed by author and arch philanthropy critic Anand Giridharadas, who said to Reuters, ‘The Gates divorce will do more than upend a family’s life. It will ramify into the world of business, education, public health, civil society, philanthropy, and beyond… our society has made the colossal error of allowing wealth to purchase the chance to make quasi-governmental decisions as a private citizen.’

What it means to give while you live

Bill and Melinda’s divorce is yet another example of the reality facing ‘Giving While Living’ mega-donors, in which philanthropy takes place not at the end of life, but in the midst of major life events such as births, raising a family, and divorce.

Many have been pointing to another Seattle billionaire divorce: that of Jeff Bezos and MacKenzie Scott in 2019. Following their divorce, Scott became one of the wealthiest women in the world and super-charged her personal philanthropy, committing more than $6 billion in the span of several months – a sum and speed that eclipsed almost everyone in the philanthropy world.

For the Gates’, their divorce will create new questions about their $124 billion fortune – much of which has not yet been donated to the Foundation. According to the New York Times, they are believed to have a prenuptial agreement.

Another billionaire divorce that rocked the philanthropy world occurred in 2013 when Sir Chris Hohn divorced then-wife Jamie Cooper. The pair founded the Children’s Investment Fund Foundation together. Their split, which included the largest divorce settlement in the history of British courts, was highly acrimonious. It led to Cooper stepping down from the board of CIFF – also a small board comprised of the couple and a friend; founding Big Win Philanthropy, her own charity; and agreeing on the transfer of £270 million from CIFF to the new foundation, which later went to court in 2020.

Bill and Melinda Gates met when she joined Microsoft as a product manager. They married in 1994 and have three children, all over 18. Their foundation was founded in 2000.

Together, with Warren Buffet, they are the co-founders of the Giving Pledge, which was launched in 2010 and now has 211 signatories who own an estimated combined total of $600 billion in assets.