The Calouste Gulbenkian Foundation has awarded climate advocate Greta Thunberg the Gulbenkian Prize for Humanity, a €1 million prize to reward outstanding work in climate change mitigation and adaptation. Thunberg has announced she will be donating the €1 million to various climate groups. 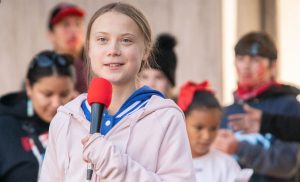 The Gulbenkian Prize for Humanity was established earlier this year as part of an effort to recognise people, groups and organisations around the work whose work towards tackling the climate emergency stands out for its novelty, innovation and impact. The prize will be awarded annual basis, according to the Foundation.

Thunberg was awarded this year’s prize for the way she ‘has been able to mobilise younger generations for the cause of climate change and her tenacious struggle to alter a status quo that persists’, said Jorge Sampaio, chair of the prize jury.

‘This means a lot to me, and I hope it will help me do more good in the world,’ said Thunberg in a video on Twitter, expressing her gratitude. In the same video, Thunberg announced she will be donating the €1 million through her own foundation, the Greta Thunberg Foundation, to help people on the front lines affected by the climate and ecological crisis, especially in the global south, as well as those fighting for as sustainable world.

She has so far announced a donation of €100,000 to the SOS Amazonia Campaign led by Fridays for Future Brazil and €100,000 to the Stop Ecocide Foundation to support work to make ecocide an international crime.

Comment: Greta Thunberg Net Worth (2021) Is Not What You Think? Read!