A Brazilian investment fund is taking to heart the Vatican’s endorsement of leveraging capitalism’s tools to help address inequality.

An investment firm, First, is on track this year to raise the country’s largest so-called impact investing fund, which is aimed at promoting social good as well as profitable returns. And it is being supported by some big players like JPMorgan Chase and the World Bank’s private investment arm.

First is also being backed by an even higher power: a trust established by a 199-year-old international order of the Roman Catholic Church. The capital provided by the Oblate International Pastoral Investment Trust is its initial investment in a Brazilian impact fund. The amount, about $7 million, may seem small, but it reflects the growing interest in the sector by Catholic groups worldwide. And for the Catholic Church, the concept seems to dovetail with Pope Francis’ focus on addressing inequality. 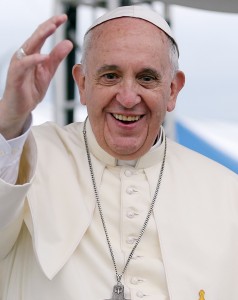 Ensuring that faith-based investments are consistent with Catholic values has long been difficult. But many people increasingly see what is called impact investing — which measures both financial and social returns — as one way to do so. Not only are investment gains important, but the fund also gauges whether its investments are providing social improvements, such as in education, health care or the environment. This asset class is making inroads in Brazil, home to the world’s largest Roman Catholic population.

… he [Pope Francis] has discussed impact investing with unusual specificity. He gave a private address last June to a group attending a two-day conference in Rome on impact investing, co-organized by the Vatican’s Pontifical Council for Justice and Peace. Church treasurers as well as finance heavyweights, including executives from Goldman Sachs and Bank of America Merrill Lynch, attended. In those remarks, Pope Francis lauded the sector, saying, ‘Impact investors are those who are conscious of the existence of serious unjust situations, instances of profound social inequality and unacceptable conditions of poverty affecting communities and entire peoples.’

Click here to read the full article by Vinod Sreeharsha, published by the New York Times on 21 May.