Cause for concern: A World AIDS Day account of philanthropic funding

In our report, published in the lead up to World AIDS Day 2018, Funders Concerned About AIDS (FCAA) finds that HIV/AIDS-related giving among private philanthropic organisations decreased by five per cent ($37 million) from 2016 to 2017. At $638 million, this is the lowest amount of disbursements since 2014. 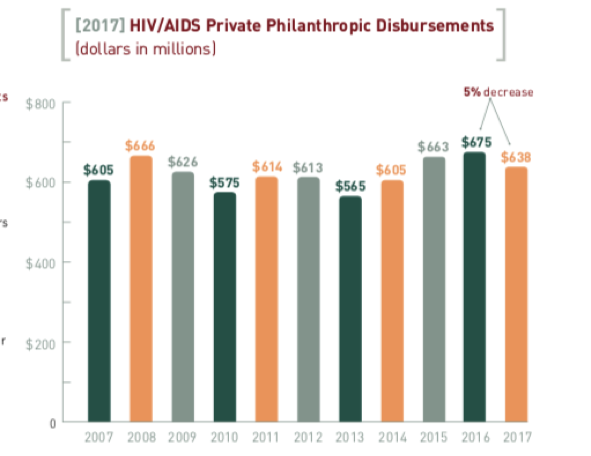 This decrease was driven largely by two factors: (1) decreases in funding by the majority of funders, and (2) continued concentration of funding among a small set of organisations. In 2017, 88 per cent of total funding came from the top 20 funding organisations.

On its own, this trend may not look all that alarming. However, it should be considered in the broader global context.

At our recent AIDS Philanthropy Summit, FCAA members focused a great deal of attention on ill-advised policies, such as the U.S. government’s Global Gag Rule[1], that threaten to harm international HIV and family planning efforts. In addition, for the past two years, the Kaiser Family Foundation has reported declining donor government funding for HIV and AIDS.[2] Though there was an increase in the 2017 report, it is an anomaly driven by the timing of the US’s contribution and is not expected to continue. In fact, eight of 14 governments decreased resources toward the fight. Further, UNAIDS estimates that $26.2 billion will be needed annually by 2020[3] to achieve the global target to end AIDS as a public health threat by the 2030 Sustainable Development Goals’ deadline. This leaves a roughly $6 billion gap between available resources and need.

At just two per cent, philanthropic funding has been a small but essential component of the fight against HIV and AIDS. In fact, it is often the only source of unrestricted funding available and can be used for activities including advocacy, which is an enormous lever to help mobilise the fight. Philanthropy also leads the way in supporting action against HIV and AIDS at the community level. Communities are at the forefront of the global HIV and AIDS response. Many of the key innovations, breakthroughs and progress on the ground would not have happened without the involvement of communities.[4] A recent FCAA analysis found that 44 per cent of HIV philanthropy is directed at civil society organisations, with 20 per cent ($185 million) going to those specifically at the local or national level.

To frame this more specifically, let’s look at what this means in the context of the UK, which is the second largest bilateral donor to the global response and home to the second largest source of private philanthropic support for HIV and AIDS outside of the US. 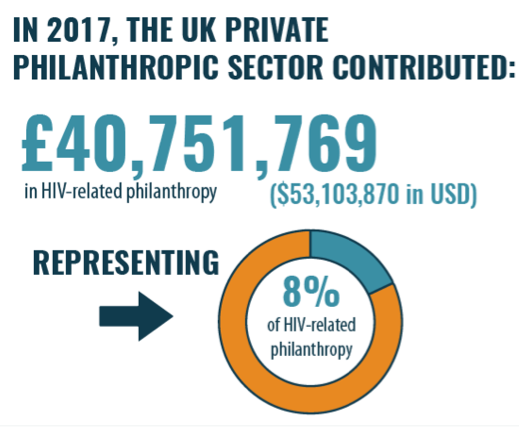 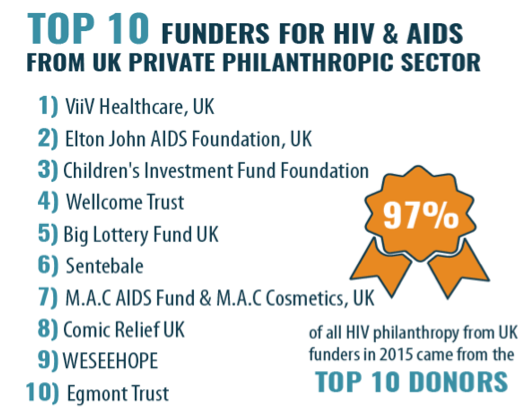 But such support is not guaranteed. In the past few years we have seen the closure or sunsetting of key UK-based philanthropies, such as the Monument Trust and the Diana, Princess of Wales Memorial Fund. More recently, Comic Relief, the funder famous for its Red Nose Day events, determined that HIV was no longer a priority funding issue. These examples are part of a very unfortunate trend; even though the epidemic remains an enormous public health threat, other funders are, similarly, shifting focus from HIV. It is not only the loss of resources that will have an impact. The loss of these organisations’ presence, leadership and advocacy jeopardise HIV and AIDS’ place as a global priority.

Private foundations can play a key role in leveraging continued financial, political and programmatic prioritisation of HIV by the UK and other donor governments. We know we cannot fill gaps left by declining public resources. But we can support movements to counter inhospitable environments. Our resources can be directed toward endangered key affected populations and regions that rely on donor support to sustain public health.

Saturday is World AIDS Day – a day of recognition, awareness and, perhaps most of all, hope. Therefore, hear this message not as gloomy, but rather as a call to action. The FCAA report sounds an alarm, waking us up to the fact that we cannot take our focus off the epidemic. With donor governments at risk of complacency, it is private philanthropy’s duty to wake them up. Join us in mobilising the philanthropic response to HIV and AIDS.

John Barnes is the Executive Director of FCAA