Never before have I attended a philanthropy gathering of this scale where the conversations have been so open and honest about things that are wrong with mainstream philanthropy and ODA. The Global Summit for Community Philanthropy is a truly remarkable event that has moved the needle on the our understanding of philanthropy’s role in society and its methods of working.

The conversations on day one of the Summit are groundbreaking in their scale and reach. They have opened up a treasure chest of tools and stories that make a loud call for philanthropy to be more – more than ‘financial capital’.

The speakers ranging from a former ambassador, leaders of big foundations to grassroots community organisers all emphasized the value of trust, community assets and capacities as philanthropic capital needed to build “caring socities”.

In a time when philanthropy’s narrative is inclined to the more corporate inspired technochratic aspects of the work such as ‘strategy’, ‘investment’ and ‘measurement’, the Summit on day 1 drew attention to the human elements to this work. Among other values, it emphasized ‘compassion’, ‘empathy’, ‘dignity’ and ‘solidarity’ as the cornerstones of philanthropy that can really “#shiftthepower” to communities that have been marginalised and excluded from development processes.

The concurrent sessions later in the day helped to translate these values into practice. For example the session that I attended discussed ways to use data that benefits not just the individual foundations but the entire philanthropy field and the communities we seek to serve. 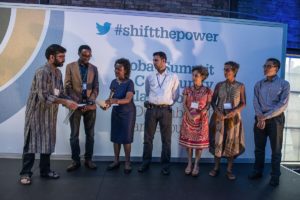 The diversity of the community philanthropy approaches and contexts was however captured best in the vision and work of the Olga Alexeeva prize finalists at the end of the day. Their personal experiences that they so generously shared were emotionally compelling, once again breaking the mould of the transactional nature of  “industry” language.

I’m moved by the atmosphere at the Summit – from Bob Dylan to the intangible aspects of philanthropy, the conversations are clearly saying that the way mainstream philanthropy is practiced does not work – its impact on complex social problems has been limited. They are saying that philanthropy needs to relinquish it’s power and overcome the temptation to lead with money because there is evidence that things change when communities lead and when power is shared.

Chandrika Sahai is the coordinator for the working group on Philanthropy for Social Justice and Peace.