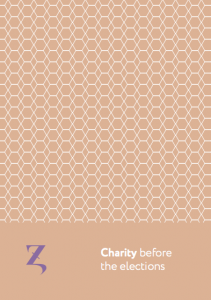 What are the scales of election charity? What consequences does election charity have on the general charity sector? These are questions that Ukraine’s Zagoriy Foundation is seeking to answer in a recently released report looking at how pre-election campaigning affects the nation’s charitable sector.

Pre-election charity became a notable phenomenon during Ukraine’s last election, which was held at the end of October, noted the Zagoriy Foundation. ‘We never saw such a scale of charity before’, a Ukrainian foundation representative is quoted as saying in the report’s introduction.

Zagoriy differentiated pre-election charity from permanent charities by look at criteria such as political affiliation, relation to the name of a candidate or party, active publicity component, activity only in the campaign period, lack of a permanent vision, unsystematic activities, money received from only one source, and opaque activities.

One of the findings of the report is that pre-election charities are not effective, as they tend to offer only temporary funding, lack follow-up, and often pursue poorly planned strategies as their main focus is to garner media attention. This kind of support is ‘ambiguous in terms of ethics’, the report says.

The report found that pre-election charities can undermine trust in foundations that operate on a permanent basis. Other negative outcomes include permanent foundations struggling to work with media, a devaluation of the foundation’s work that causes burnout among staff, and demotivation of donors.