Throughout the last year, governments across the world used the uncertainty of the pandemic to clamp down on civic freedoms. In response, millions of people around the world mobilized to demand more just, equal, and sustainable societies – and these movements mattered, finds a new report from CIVICUS. 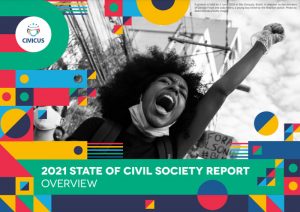 Global civil society alliance CIVICUS’ annual report, ‘State of Civil Society Report 2021’, identified the Black Lives Matter movement as one that changed the conversation, not just in the U.S. where it began following the murder of George Floyd one year ago, but in places as widespread as Colombia, the Netherlands, and South Africa.

And other movements for change flourished in the wake of protests for equity and justice. In Nigeria, citizens mobilised to protest police violence. In India, the largest coordinated strike in world history demanded protection for farmers. In Russia, protests demanded an end to authoritarian corruption.

All of this collective action led to breakthroughs in democracy and human rights throughout the world, said CIVICUS.

In Chile, concerted street protests led to a commitment to develop a new constitution through democratic processes, with gender parity and Indigenous representation guaranteed. Sustained mobilisations in Argentina resulted in abortion being legalised, while in several countries young environmental activists took action to keep climate change in the spotlight. Civil society’s collective action forced an election re-run in Malawi, and it also overcame systematic voter suppression in the USA. Following civic actions, same-sex relations were decriminalised in Bhutan and Gabon and same-sex marriage legalised in Costa Rica.

These global movements flourished in a year where the limits of political institutions and social support were made brutally clear. The pandemic offered a stress test for these institutions, and most were found wanting. 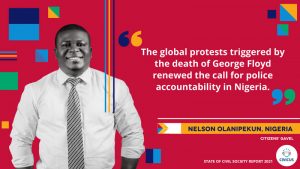 Many governments poured out official propaganda and sought to control the flow of information, ramping up censorship and criminalising legitimate inquiry and commentary. China was in the front rank of states that expanded surveillance practices and trampled on the right to privacy. In addition, several states increased their coercive power. In the Philippines, people were put in dog cages for breaking pandemic regulations, while in several Middle Eastern and North African states, including Bahrain, Egypt and Iran, human rights defenders remained in crowded jails, at risk of contracting Covid-19.

The path of repression was not a necessity, but a choice, CIVICUS noted – drawing on the examples of countries such as New Zealand, South Korea, and Taiwai, which got the virus under control through communicating pandemic response measures clearly and respecting rights and democratic freedoms.

A role for civil society 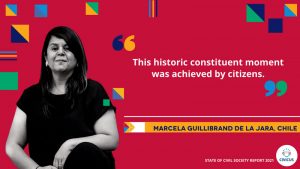 Where governments failed to respond effectively to the pandemic, time and again civil society stepped up, CIVICUS found.

Reflecting on the critical role of civil society in the last year, CIVICUS outlines some essential actions for the safeguarding of civic freedoms.

States should reverse rights restrictions imposed under the pandemic at the earliest opportunity, CIVICUS said. As well as respect human rights and democratic freedoms, and listen to the voices of protesters.

And the international community should do more to uphold norms on civic freedoms and support peaceful assembly.

‘The great current wave of protests is sure to continue,’ CIVICUS wrote. ‘People are brave to protest, but they should not have to do so at the risk of being thrown behind bars, or facing brutal, even lethal, violence.’