We have heard about it all before: rising temperatures, failing crops resulting in food insecurity, the melting ice caps – these are all part of the narrative of climate change. Natural disasters, which seem to be occurring with increasing frequency and magnitude, add to the litany of the world’s climate-related woes. These phenomena are well documented. What isn’t perhaps as well documented is how Indigenous people have dealt with disasters in the past. 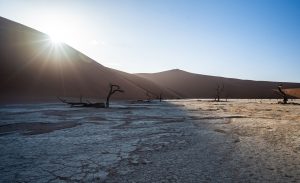 The recent cyclones in Africa, earthquakes and tsunamis in Asia, and similar events in the Americas are sadly all too familiar – every time one reads about a new event one gets a sense of déjá-vu. In short, natural disasters have been with us for a long time, and they continue to be a fact of life on Earth, albeit with increasing strength and frequency due to man-induced disruptions to the atmosphere.

With each event the people that survive carry with them lessons to make it through a similar disaster in the future. For example, in Africa older generations carry the wisdom and knowledge with regards to which type of crops to plant when weather patterns change. They know how to reinforce their homes and protect their livelihoods by using certain types of raw materials, and they know to move their planting grounds to less risky areas. There are examples in other parts of the world, such as native Americans co-habiting with nature and moving with the tides, and how Indigenous groups adjust their lives to co-exist with changing environments. The Masai Mara in East Africa still live nomadic lives today, moving according to the weather conditions.

Whilst we are all caught up with Covid-19, the threat of climate change continues to loom large.

Human beings are resourceful, particularly when it comes to leveraging technology to manage a large-scale threat. This became clear when it took only a year to manufacture a vaccine to save the world from Covid-19. (One would hope vaccines will emerge for the other endemic diseases that have been with us for some time now.) The Covid vaccine has shown that humans are very capable of adapting to crisis and responding quickly to things that matter to them. It shows that we are more than able to grab the climate change bull by the horns and adapt our ways to reduce its impact. The difference is that climate change needs to become something that matters to those with pockets deep enough to fund activities.

If governments and philanthropic organisations managed to mobilise billions of dollars in to produce a vaccine for the entire world in just over a year, imagine what could be possible with much smaller funding towards Indigenous groups and community-based organisations in a year?

In funding climate change, however, it is necessary to examine the rationale behind the funding. People have always lived with natural disasters: why not allow them to tap into those life lessons and help them to help themselves? It is pointless to give tremendous amounts of money to a renewable energy movement, for example, that still requires ongoing capital investments, when there may be vastly cheaper forms of renewable energy that Indigenous people know how to access. Why not fund Indigenous groups to expand their wisdom and knowledge to share with the rest of the world? In this way, the actions we take are not only comprehensible to the people they are targeted at but are also sustainable.

Another simple example of this is that while most rural communities use firewood and non-renewable resources to cook fresh food, some Indigenous groups rely on the sun to dry their meat and vegetables, using small quantities over time.

In short, people are not helpless nor clueless, and by focusing on the smaller things, such as sustainable ways of storing food, we cannot only help people to help themselves, but also build climate change resilience. Unlike expensive vaccines, less capital can go a longer way if philanthropic activities are channelled towards local, Indigenous groups to build on what they already know. Implementing these behaviours could be the game changer in the climate change battle.

If governments and philanthropic organisations managed to mobilise billions of dollars in to produce a vaccine for the entire world in just over a year, imagine what could be possible with much smaller funding towards Indigenous groups and community-based organisations in a year?

More often than not, philanthropy funding goes to the established, well-known international NGOs – but the climate change battle cannot be fought by them alone. We also need to provide support for the people who are in the front line, those most affected by climate change. In many cases you will find that those communities already know what to do in the face of natural disaster. They already have the answers to helping themselves – answers we may not begin to imagine.

Keratiloe Mogotsi is a manager at the Centre on African Philanthropy and Social Investment and a doctoral candidate at the Wits Business School in South Africa.