A total of nearly £15 billion pounds has been donated in the UK by individuals, foundations and corporations over the past 10 years, according to the latest Coutts Million Pound Donors Report. 2016 also saw the highest total value given (£1.83 billion) since the report began.

Tracking the number, size, source and destination of donations of £1 million pounds or more, the report analyses key trends in major philanthropy over the past decade, showing there has been a boom in philanthropy since the financial crisis. 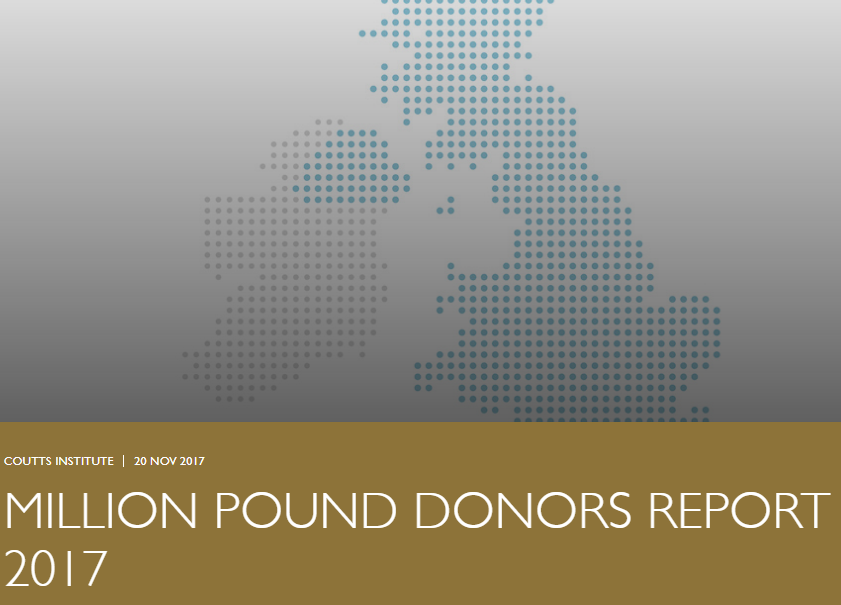 This growth is in part fuelled by the increasing number of initiatives designed to celebrate and inspire philanthropy but also by the development of specialist philanthropy advice.

Research shows that people who get advice are more inclined to give more.

This illustrates the enduring attraction of charitable foundations for individuals or corporations who seek to ‘bank’ their resources to then be distributed to charities, often in smaller amounts, as their strategy evolves.

The report also shows there has been a surge in corporate philanthropy and a growth in donations to British charities from donors located overseas.

While ‘mega-gifts’ (donations of over £100 million) tend to capture media headlines, giving exactly one million is the most common donation. One million appears to be economically and psychologically a significant figure, which resonates with both donors and charities.

In addition to the data, gathered by the University of Kent from material in the public domain, the report includes 10 top tips for donors and an analysis of key trends in philanthropy over the past 10 years. The report also features  interviews with major donors including Sir Terence Conran and his son Sebastian, Rory McIlroy, Liccy Dahl, Gordon Roddick, Shalni Arora, Sir Paul Ruddock, the Coins Foundation, the Coutts Foundation, the Stone Family Foundation, Clive and Sylvia Richards, Sir Ian Wood and Lady Carole Bamford. The interviews show the distinctive role philanthropy can play, from tackling poverty, supporting innovation, and holding powerful institutions to account as well as support for arts and culture.

To read the report in full go to http://www.coutts.com/donorsreport.

For more see our recent interview with Lenka Setkova