Everyone is funding oxygen. This is a problem.

Media attention on Covid-19 deaths due to a lack of oxygen in big cities has skewed donor priorities. This is impacting relief efforts on the ground.

As the second wave of Covid-19 rages through the country, media and global donor attention is focused on the supply of oxygen in its various forms—even as the country grapples with extreme hunger, poverty, and loss of livelihoods.

The question today is, why aren’t global, institutional funders—many of whom are familiar with India’s development sector landscape—funding humanitarian relief during this wave? Especially at a time when nonprofits that have been embedded in communities for years are struggling to raise funds for their efforts.

These nonprofits work with vulnerable populations, many of whom have already been pushed into poverty due to the first wave of Covid-19. From March 2020 to October 2020, the number of individuals below the poverty line in India increased by 23 crore—a staggering 77 per cent. An alarming 90 per cent of households surveyed had less to eat. The second wave seems to have exacerbated the problem as primary breadwinners in these communities succumb to the virus.

A whopping 71 percent of the organisations said the biggest demand was for food and rations in the communities they work in.

International donor attention however has been entirely focused on the supply of oxygen in Delhi, and now to some extent, Bangalore. The rest of the country seems to have faded into the background despite 533 of India’s 700 districts showing a positivity rate of more than 10 per cent, and 42 per cent of districts reporting a positivity rate more than the national average of 21 per cent.

GiveIndia—one of India’s leading fundraising platforms—has raised more than USD 32 million (INR 240 crore) as part of its India Covid Relief Fund (ICRF-2) in the first three weeks of the crisis[1].

According to a tweet by venture capitalist Vinod Khosla, who has pledged USD 10 million to ICRF-2, GiveIndia has ordered 20,000 oxygen concentrators, 14,000 oxygen cylinders for Delhi and Bangalore, and 10 PSA (oxygen generation) plants. At an average cost of INR 60,000 per concentrator and INR 15,000 for cylinders, the cost of concentrators and cylinders alone amount to INR 141 crore.

Compare this to the aid that has been received by the Government of India from 38 countries and dispatched to the various states and union territories as of May 13th: 9,294 oxygen concentrators, 11,835 oxygen cylinders, 19 oxygen generation plants, 6,439 ventilators, Bi-PAP and CPAP machines, and more than 4.22 lakh Remdesivir vials.

The entire aid that the government has received in the form of oxygen concentrators and cylinders for use countrywide is far less than what GiveIndia will receive and deploy in Delhi and Bangalore alone.

According to Atul Satija, CEO, GiveIndia, ‘A bulk of GiveIndia’s initial funding has been directed towards procuring medical supplies because that was the biggest ask from hospitals and nonprofit partners. Plus, that’s where most of the global donors—both individual and institutional—wanted their money to go.’ 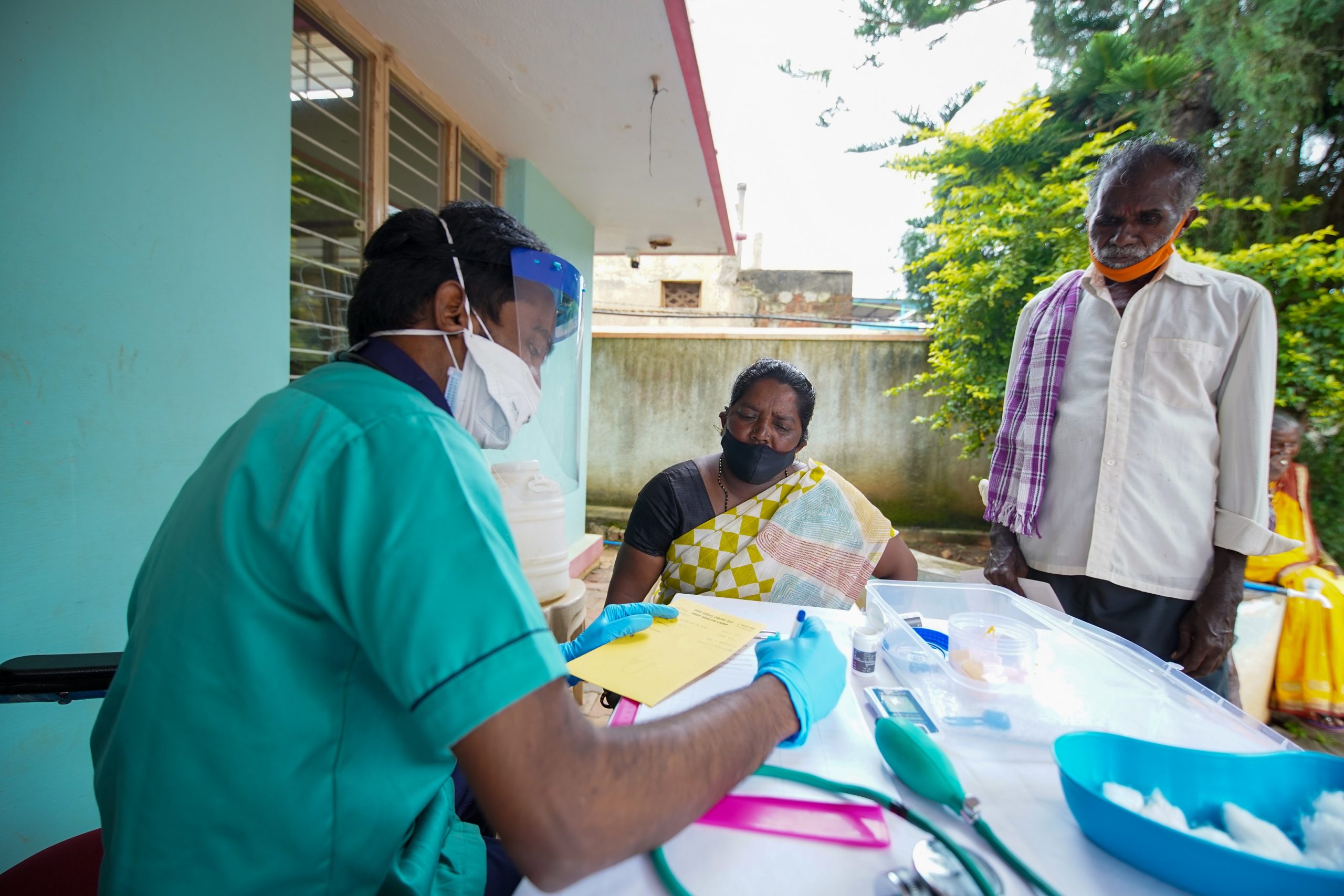 Fundraising organisations that serve as gatekeepers to resources, are also largely focused on medical supplies

Between these three fundraising organisations, as well as a few others in the US, more than USD 80 million has been raised till date.

Is this really the best utilisation of private donations?

In a country that is being ravaged not just by the virus medically, but also has millions more suffering from hunger, lack of jobs, and inadequate information on how to deal with the virus when they get infected, why is philanthropic money being used only for oxygen and allied supplies?

Funders to GiveIndia’s ICRF-2 include some of the largest and most well-known international foundations who already have a presence in India, as well as global and Indian companies. Also contributing to the fund are ultra-high-net–orth individuals including Vinod Khosla, Sundar Pichai, Ram Shriram, and others.

This desire to fund oxygen equipment, especially by well-off individuals, harks back to the form of giving that prefers physical assets, because donors feel their money can be accounted for.

Many of these global foundations and Indian corporates have been in India for years, and fund high-impact organisations as part of their business-as-usual operations; they also know of many other nonprofits in India who are in a position to provide humanitarian relief to communities across the country almost immediately. By funding GiveIndia, their initial focus will be restricted to two cities alone, at a time when the overwhelming need is elsewhere.

According to an executive director of a nonprofit, this desire to fund oxygen equipment, especially by well-off individuals, harks back to the form of giving that prefers physical assets—hospitals, schools, and now oxygen concentrators and cylinders—because donors feel their money can be accounted for. They can see where it’s going, which acts as a proxy for impact. And much of this comes from a lack of trust in nonprofits, despite it being these very same nonprofits that are at the forefront of every crisis providing rescue, relief, and rehabilitation.

The need on the ground is markedly different

According to Anshu Gupta, founder of Goonj, ‘While we have been running around trying to arrange oxygen for our families, teams, and communities, the reality is that for millions, the real oxygen today is dal-chawal (lentils-rice). Even within the metros, there are possibly more people dying of hunger with no access to food, and outside of hospitals. In addition, there is a much larger population in the villages suffering from financial distress and now a health crisis as well. These are families of the daily-wagers, the ones who have lost their jobs, the ones going back home to their villages, but because the entire focus is on oxygen and beds, the hunger of millions is invisible. We do need to understand that it is not just a health crisis; it is a hunger issue too.’

Two weeks ago, India Development Review (IDR) put out a call to nonprofits asking them to list the areas they were seeking support for. We received more than 200 requests from across the length and breadth of the country, of which 159 were verified as on May 13th, 2021, and listed on this page.

Of these, 110 (69 per cent) have a valid FCRA licence, thereby making them eligible for global funding. In terms of support required, a whopping 71 per cent of the organisations said the biggest demand was for food and rations in the communities they work with, while almost half of the requests were for vaccination awareness and support. Only 29 per cent asked for funding to provide oxygen and medical supplies[2]. The ‘Others’ category that ranged across mental health counselling, online medical consultation, counselling caregivers, and so on, comprised 35 per cent.

The entire aid that the government has received in the form of oxygen concentrators and cylinders for use countrywide is far less than what GiveIndia will receive and deploy in Delhi and Bangalore alone.

Conversations with organisations and people working in communities reinforce the above data. The need is overwhelmingly one of basic necessities of food, social security, and restoration of livelihoods, as well as spreading awareness regarding testing and vaccinations.

According to Anish Kumar, Co-lead at Transform Rural India Foundation (TRIF), the economic fallout has been severe both in urban India as well as the villages. ‘The free rations provided by the government are only till June 2021. The real stress in rural families will be during July to September after the kharif (monsoon) crop has been sown. We need to help families tide through these months with lives and livelihoods both being critical,’ he said.

What will it take to fund the real need?

As the Covid-19 wave moves into rural India, there is a fear that media attention might fade because it no longer affects people like us. And with it, will go financial support as well.

The oxygen concentrators being used in Delhi and Bangalore, cannot be easily moved to rural India. This is because, as CEO of a large corporate foundation observed, ‘We can’t layer tons of equipment on a rickety healthcare system with no trained staff, and assume it will do the job.’

As Kumar of TRIF says, wastage (excess) is as bad as leakage (appropriation of funds).

Individual givers and global companies funding large ticket donations should ask their fundraising intermediaries to guide them to areas where there is most need, and demand that they be transparent about which nonprofits they are partnering with, and to what end. Intermediaries for their part must look beyond what they can raise easy money for, and instead listen to what the implementing organisations are asking for.

The immediate support will have to be for food, social security, livelihood restoration, increased testing, and infection management. There are scores of good, high-impact nonprofits who are cash strapped due to the new FCRA amendments which prevent them from receiving subgrants from their traditional partners—larger nonprofits registered in India, such as Oxfam India, National Foundation for India, Child Rights and You (CRY), among others.

However, these smaller nonprofits can receive funds directly from fundraising organisations who are registered in the US under its 501(c)(3) registration—GiveIndia, American India Foundation, Dasra, Sewa International and others—all of whom have together raised money to the excess of USD 80 million in less than a month.

There is an opportunity for these fundraising intermediaries to respond to the needs of communities, and disburse this money to where it’s really needed versus where it’s most visible; for them to shape donor opinion and point them away from physical assets to real support; to get us, givers, to trust nonprofits to do their jobs and provide them with the financial assistance they need so that they can focus on serving those who have been pushed beyond the margins yet again.

This article was originally published by India Development Review and has been republished here with permission.

Smarinita Shetty is the co-founder and CEO at the India Development Review.