A critical moment for philanthropy in India

‘It’s an interesting time for philanthropy in India. While there is a significant increase in the total volume of giving, on the other hand we are still grappling with finding the right models to create sustainable impact while adhering to principles of social justice.’ So said Amitabh Behar of the National Foundation for India (NFI), hosting the launch of the Philanthropy in India report authored by Caroline Hartnell in New Delhi on 23 February 2018. The event was hosted by NFI, the Global Fund for Community Foundations (GFCF) and Philanthropy for Social Justice and Peace (PSJP).

Rise in the quantum of giving in India 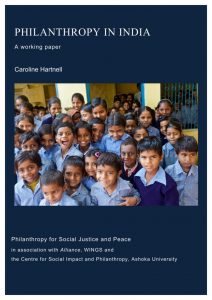 The report throws light on the current state of Indian philanthropy and new trends through conversations with people who have been trying to promote, support or strengthen different areas of philanthropy. It particularly notes the increase in the quantum of giving in India across the spectrum. Introducing the report, Sumitra Mishra of PSJP noted: ‘DaanUtsav, which started in 2009 as Joy of Giving Week, and has become a tremendous success, is engaging 60 to 70 lakh (6 to 7 million) people today in the act of giving. According to Bain & Company, India added over 10 crore or 100 million donors between 2009 and 2013.’

At the same time she noted that ‘data from the Ministry of Corporate Affairs indicates an increase in the total CSR spend by Indian companies to roughly $1.5 billion in 2016-17 from $ 1 billion in 2015-16. CAF India recorded 19,500 adherents of its workplace giving programme in 2015-16, and approximately $1.6 million raised through the programme.’

Given the incredible rise in giving, it is no surprise that speakers expressed concerns about how the money is spent. Behar noted the emergence and growth of domestic philanthropy in India as well as concerns about the path this emerging philanthropy is taking, particularly in its preference for supporting charitable causes as against social justice or rights-based work. ‘Whichever way we see it,’ he said, ‘there is no doubt it’s a critical moment and we need to engage with key stakeholders to influence Indian philanthropy to maximize its impact on positive social change.’

Need for data and innovation

Pradeep Nair of the Ford Foundation stressed that while ‘the quantum of philanthropic funds being generated is quite encouraging, we should make every effort to make meaningful use of this.’ Nair stressed the need to generate data and more empirical evidence and analysis about issues where we want the funds to go. This would include many social justice issues at community level. Without data funds will continue to go to the same causes – those that already have the data that enables them to show both the need for investment and the impact created. 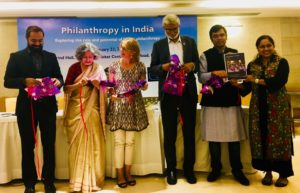 Nair further stressed the need for the development sector to break out of its traditional mould and to increasingly try out new ways of working. He gave the example of how the Ford Foundation is experimenting with development impact bonds that link grants with impact being created and also with social incubators. Third, Nair called for a change in the culture of the non-profit sector to catch up with growing competition from within and outside the sector for limited funds. It’s critical to back audacious ideas for social change and to improve the image of the sector, he said. Donors need to move away from what is known as ‘donor’s darling model’, ie working with a few known organizations they are comfortable with. It’s easy to work with known organizations but it’s critical to seek out and work with new exciting organizations.

Jenny Hodgson of the Global Fund for Community Foundations helped connect philanthropy to its roots: empathy, support and solidarity. ‘Philanthropy is a troublesome word,’ she said. ‘More recently the word philanthropy evokes elite wealth.’ But the irony is, she said, that big money does not necessarily solve problems. ‘The quantum of philanthropy does not necessarily bring change to the unequal power structures that cause social injustice and poverty.’ However, she reminded participants that the origins of the word philanthropy suggest empathy for our fellow human beings. ‘Social support systems and cooperation exist even in poor tribes.’ With this she stessed the importance of local resources and local support for civil society in order to reduce its dependency on outside grants.

Author Pushpa Sunder commented that philanthropy, especially community philanthropy, surrounds us in everyday life. The Narmada Bachao Andolan in the 1990s, led by a large number of farmers against large dams being built on the Narmada river with catastrophic impact on the lives of farmers, was largely supported by community philanthropy before the concept of crowdfunding was even known. The Indian philanthropic landscape is filled with many such examples where the community has come together to sustain development initiatives or social justice movements without outside support. The lessons are there for smaller organizations to get inspiration from to carry forward their work. This is more critical for organizations and activities which might be politically sensitive with a reduced chance for obtaining outside funding support, Sundar said.

The role of philanthropy in enabling local support was further stressed in the particpants’ discussion by Subhas Mittal from Social Research and Reform Foundation, who commented that most emerging grantmakers do not look at nurturing grantee organizations. ‘There is very little handholding. Focusing on nurturing smaller organizations is critical.’ Mittal suggested that ‘each grant should have a component for local fundraising targets’. Mazhar Hussain from the Confederation of Voluntary Associations commented that, given the changes in development funding in India, enabling people to leverage government resources should be one of the key priorities for any development intervention.

A more holistic approach to the role of companies

Another strand of conversation to emerge from the event was the importance of cross-sector learning in Indian philanthropy, stressed by Shankar Venkateswaran, who until recently served as the head of sustainability of the Tata group of companies. In his comments Venkateswaran said that, given the nascent nature of private philanthropic giving, the expectation for companies to invest in social justice maybe unrealistic at this moment. ‘Civil society has a critical role to educate the private sector about the nuances of philanthropy and social change.’ Venkateswaran also urged participants to look more holistically at the role of companies in social change processes. ‘The 2 per cent mandatory CSR is only the tip of the iceberg. There is the remaining 98 per cent which causes a lot of impact on the environment and people that needs to be carefully considered both by companies and by stakeholders.’

No doubt Indian philanthropy is at a critical moment. The rise in philanthropic giving has the potential to address issues of poverty and its associated manifestations, but it also has the potential to play a more transformational role in bringing positive social change. For the latter, it would be imperative that Indian philanthropy recognize the need to maintain a balance between charity and social justice. We will also need to see new ways of engaging and partnerships between philanthropy, civil society, private sector and government to influence use of these philanthropic resources. Social justice focused civil society organizations will have to play a far stronger role in influencing such engagements and the outcomes that will determine the society the next generation will inherit.

Pradeep Patra is senior programme officer at the National Foundation for India.

This article originally appeared on the Philanthropy for Social Justice and Peace website on 28 March 2018. The original article can be found here.

The Philanthropy in India report was published in October 2017 by PSJP in association with WINGS, Centre for Social Impact & Philanthropy at Ashoka University, and Alliance. It is available for download here.