A recent article published by The New York Times provides a look into Trump’s travel ban and how crowd funding sites help to raise money for those affected. Focusing primarily on GoFundMe, the largest crowd funding site, the article addresses not only the benefits of this new arena of fundraising, but also the critiques offered by many.

Many families and individuals such as Hanan Isweiri, a Libyan woman who was kept at an airport in Jordan with her 1-year-old son while trying to return to her husband and children in Colorado after her father’s funeral, have suffered immense financial stress as a result of the travel ban.

After the executive order went into effect, many lawyers and organizations such as the American Civil Liberties Union have volunteered their time and resources to help those affected by the ban overcome legal and financial challenges. To better serve those who ‘fall through the cracks’ like Hanan Isweiri, GoFundMe and other crowd funding sites have become extremely popular in helping raise money for immigrants and families. 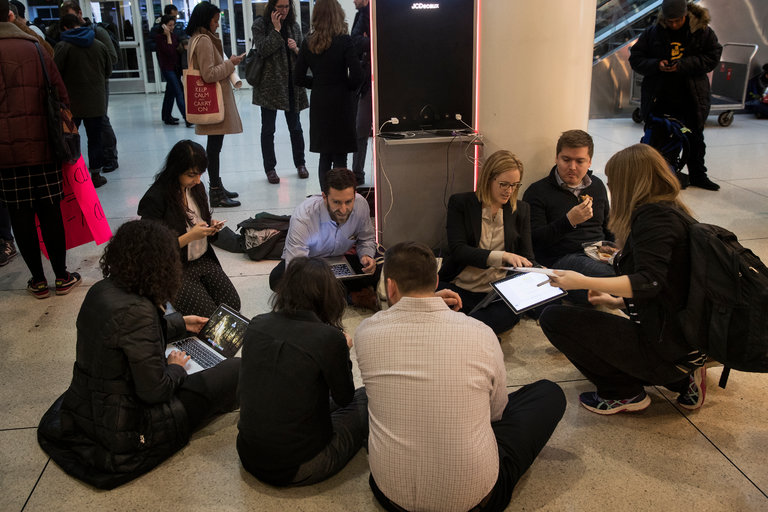 Lawyers working with the International Refugee Assistance Project at Kennedy Airport to help those denied entry into the US. Photo credit: Victor J. Blue, The New York Times.

While the article does paint crowd funding sites in a primarily positive light, it also makes note of the arguments as to why this particular type of fundraising may not be the most efficient in terms of getting the money to the people who need it. Critics and existing charities note that crowd funding mostly serves those who have the saddest stories, but neglects to provide ‘broad support’ in the wake of emergencies. Perhaps crowd funding fills the cracks but fails to cover up the holes.

However, crowd funding does have accessibility and diversity on its side. When the crowd selects the issues it wants to fundraise for, the range of different issues is much wider and donors get a ‘personal sense of investment’. While immigrants are both diverse and possess deeply personal and affective stories, perhaps crowd sourcing is the best way to lend a hand.

Halie Dalton is a student at James Madison University, Virginia, and is currently an editorial intern with Alliance.