Last week, the Feminist Humanitarian Network released research led by its women’s rights organisation (WRO) members on the challenges that the humanitarian response has presented for WROs during Covid-19, and the feminist solutions they used to overcome them. 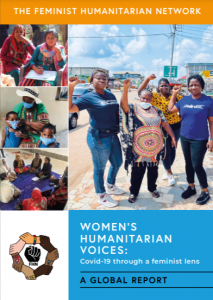 The report, ‘Women’s Humanitarian Voices: Covid-19 through a feminist lens’ finds, perhaps unsurprisingly, that one of the major challenges for WROs during Covid has been access to donor funding. In six of the eight countries that contributed to the research, WROs had limited to no funding from donors to resource their response activities.

There were many reasons for this – a major one being excessive due diligence requirements, which one organisation in Nigeria described as being ‘herculean’. Another organisation in Nigeria shared that the expectation that donors have of WROs to demonstrate ‘capacity’ through intensive application processes and then denying them funding when they can’t, presents a catch 22 – as without funding, WROs are unable to recruit the staff required to fulfill such requirement. Put simply, ‘If we have the funds, we will have the capacity.’

Many WROs reported having submitted countless proposals to resource their Covid response efforts, and being rejected repeatedly. Others shared that the same challenges they always face have persisted throughout the crisis: for example, being required to submit proposals in English, which, as one organisation put it: ‘Committed organisations who are doing really good work are not well known because they are not fluent in English.’

In cases where WROs were able to access funding, they reported often being forced into a position of having little agency: being required to abandon their own strategic priorities, set in consultation with communities, in order to implement projects defined by donors with limited recognition of communities’ needs.

In Liberia, one organisation recounted that due to donor driven decision making, women-led organisations were forced to distribute buckets to households that ‘had other needs, like soap or medication.’ In Bangladesh, WROs reported only being able to access funding when larger NGOs working at the national level made the decision to fund work through them, and described this experience as being ‘relegated to implementing partner.’ When funds available lessened as a result of Covid-19, WROs were the first to lose out, meaning the work they were doing with communities to respond to GBV was severely compromised.

WROs in a number of countries reported that during Covid-19, despite being faced with unique and unprecedented circumstances, they were met with inflexibility from donors they were already working with when it came to reallocating funds or providing new funds to respond to the crisis. In many cases donors were not receptive to funding changes, or would assume WROs would be able to ‘find’ or ‘re-allocate’ funding from elsewhere.

Faced with multiple barriers, WROs in a number of countries reported funding their Covid-19 response efforts from the personal resources of their leaders, or from Village Savings Loans schemes managed by the community. In Bangladesh, five of fourteen WROs interviewed reported using personal funds for humanitarian action in the crisis.

The expectation that donors have of WROs to demonstrate ‘capacity’ through intensive application processes and then denying them funding when they can’t, presents a catch 22.

A number of FHN members shared that the only international funding they received for the response was through small feminist donors that recognise the critical role that WROs play, and provided funding that was flexible and allowed them to scale up the response efforts they were already leading, which they had designed in partnership with the communities and the women they work with.

One WRO in Palestine highlighted, however, that this is not enough – that feminist donors cannot be the only ones taking this approach, and must do more to ensure that it is taken up by others:  ‘It is really important to put this on the international feminist donor agenda – that support to women’s organisations is so vital for women, that it cannot be only small feminist donors that support each other, that they have to enter into conversation with the larger donors like the EU, the UN and foreign ministries etc.’

The Feminist Humanitarian Network’s vision is of a humanitarian system that is guided by feminist principles. This, in part, means a system wherein the power of women-led organisations working in the Global South is not undermined because they are resourced and consistently included, and their leadership is recognised and made central in shaping the humanitarian system. In order to achieve this, humanitarian actors across the sector must take immediate action – to ensure that WROs’ critical role in the ongoing Covid-19 response is resourced, and that WROs have access to flexible, long term funding from hereon in.