EFC Conference 2014: Philanthropy through partnerships for a better world

Over three days at the EFC annual general assembly, delegates spent time debating big issues around rethinking Europe. I heard passionate discussions about the role of civil society, governance and solidarity. It was a challenge to not be overwhelmed by the magnitudes of social change that we want and what it would take to achieve such changes. No doubt it will take coordination and collaboration of the public and private sectors, foundations and NGOs. The central question we returned to after every plenary was, what can foundations do in their ability and resources to help create the change we all want to see?

From an American perspective, the challenges to successful public-philanthropic partnerships seem more complex in Europe than in the United States, with even more differences across language, geography, culture and history. However, it is a difficult task made easier with the start of conversations like thsoe we had in Sarajevo discussing big questions like: What is the common vision for civil society? Can we achieve the freedom of a single, multicultural society? 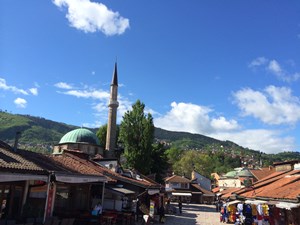 My own experience while serving at The White House in 2012-13 developing partnerships between foundations and government to benefit Asian American communities taught me two lessons. One, the importance of establishing relationships with government officials to begin conversations about partnership opportunities with foundations; and two, taking the time to develop a common understanding and language about the benefits of partnership between foundations and government for both parties. What can philanthropy offer beyond financial resources, and what can government offer beyond bringing projects to scale?

While convening stakeholders to discuss solutions (a European town hall was mentioned as an idea) is an important first step, foundations could consider additional actions. Perhaps it is encouraging EU agencies and every European country-level government to have philanthropic liaison offices which foundations can begin to establish relationships with, engaging in common issues and finding ways to work together. Another step may be to help determine a common language, a lingua franca of what foundations and governments offer in partnership to work through issues affecting civil society.

Other conference bloggers have noted the persistent rain we experienced in Sarajevo. Though it seemed as if the rain would never end, it eventually gave way at the end of the conference to sunshine, allowing us to see Sarajevo’s beauty that was there all along. So, too, I hold hope that as we rethink Europe, our collective philanthropy through partnerships can transform Europe and its people to see the beauty of a better world for all.