African NGOs are being underfunded by African and non-African philanthropists alike in comparison to organizations headquartered outside the continent, according to a recent report from the African Philanthropy Forum and The Bridgespan Group. 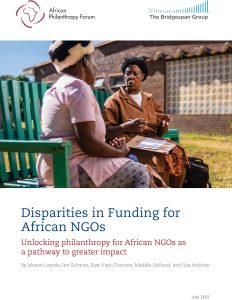 The research, which delves into the driving factors behind funding disparities for African NGOs, found that African funders directed just nine per cent of large gifts to NGOs based on the continent between 2010 and 2019, while non-African funders provided just 14 per cent to these groups. Those numbers remained virtually unchanged despite a ‘massive’ response from African funders to the Covid-19 pandemic in 2020, according to the report.

African philanthropists are directing more money toward their own private operating foundations instead of local NGOs, according to the report. These funders gave 33 per cent of large gifts to operating foundations, examples of which include the Africa-based Mo Ibrahim Foundation and The Tony Elumelu Foundation.

The research shows that without much funding flowing from African philanthropies, NGOs on the continent have been forced to look elsewhere. But non-African funders have similarly shown a reluctance to give to these groups. Instead, the majority of their large gifts have gone to international organizations headquartered outside of the continent, according to the report. International organizations may be less likely to have representatives from local communities among their leadership.

The report is the second collaboration between Bridgespan and African Philanthropy Forum. Based in the U.S., The Bridgespan Group opened its first African office in Johannesburg in 2019 with the goal of boosting African-led development.