Experts concerned as fewer Australians give to charity

The percentage of Australians donating to charity is falling, according to new research that experts say highlights a need for different giving strategies in the sector.

Roy Morgan’s Single Source survey, which is based on face-to-face interviews with more than 50,000 Australians during 2018, found only 60 per cent of people donated to charity over a 12 month period, compared to 61.8 per cent last year and 66 per cent in 2014.

The average amount donated has only grown from $460 in 2014 to $486, which represents a decline in real terms after allowing for inflation. 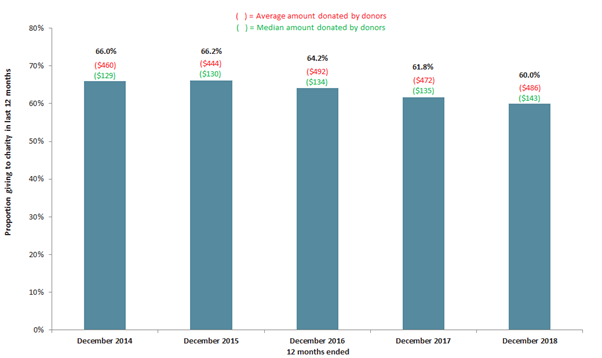 He said charities were largely reliant on donations from the over-35 age groups, with the highest average amount given being from those aged 50 and over.

‘While it is likely that the younger age groups have lower incomes and other priorities which impacts the amount they could give, their incidence of giving is generally well below average and as such represents a major growth potential for donor numbers,’ Morris said.

The research showed donors from high income households gave the lowest proportion of their household’s income to charity. 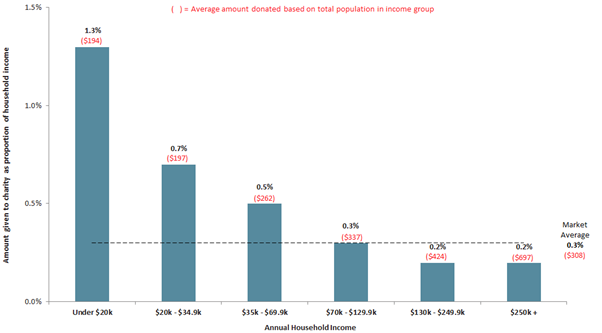 Morris said the greatest potential for increasing the overall level of donations was to focus more on higher income households.

‘They are not only more likely to have the means to give but donors from these households are currently giving a lower than average proportion of their households incomes to charity,’ he said.

‘It is vital for all businesses, including charities, to keep up to date with their customer base and in this case understand who donates and where the greatest potential for growth lies.’

Roy Morgan’s research echoes findings from a 2018 report from QUT’s Australian Centre for Philanthropy and Nonprofit Studies (ACPNS). This report said the percentage of Australian taxpayers making deductible gifts has been in decline since 2011-12, decreasing from 34.58 per cent in 2014-15 to 33.4 per cent in 2015-16.

The Giving Australia 2016 project also found the percentage of Australian donors has declined since 2005.

Giving expert Wendy Scaife, director of the ACPNS, told Pro Bono News this decline in donations was a concern not just in Australia but evident in giving studies around the world.

She said it was clear charities needed to facilitate generosity that matched people’s/employees’ means to give.

‘Giving Australia and other studies show the strong nexus between volunteering and later financial giving for instance,’ Scaife said.

‘People see the need, see the work, build their trust and interest in giving. In Giving Australia, givers who were also volunteers donated on average double the amount of other financial donors.’

She said these results also pointed to the role for collaborative giving in improving outcomes – through things like giving circles, schools, families and workplaces.

She added providing easy structure to giving was also something that might nudge the participation needle.

‘Whether it is a sub-fund in a community foundation or trustee company or a regular gift set up each month, giving that is easy, manageable in chunks, and a habit, is powerful and helps charities keep costs down and gives them predictable income streams,’ she said.

Luke Michael is a journalist at Pro Bono News covering the social sector.

This article was originally posted on Pro Bono News Australia 25 February 2019. The original article can be viewed here.