Filling the data and knowledge gap: How philanthropy can better partner with Indigenous communities

Events in recent years, however, indicate that this cultural context is slowly shifting. In 2015, Canada’s Truth and Reconciliation Commission released its final report documenting the history of the country’s Indian residential school system and providing recommendations for reconciliation between Canadians and Indigenous peoples. In 2016, thousands of Indigenous and non-Indigenous peoples stood in solidarity with the Standing Rock Sioux Tribe to protest the Dakota Access Pipeline in the U.S. And in 2019, the Waorani community in Ecuador won a landmark lawsuit against the government that will halt oil companies’ abilities to exploit land in the Amazon rainforest.

Conversations are also taking place about how inequities are perpetuated throughout philanthropy. There have been calls for greater honesty about the origins of philanthropic wealth and momentum for philanthropy to cede decision-making power to grantees and return agency to communities. There has also been wider recognition of the effects of historical trauma caused by colonization and centuries of systematic oppression and the resulting social, psychological, economic, and spiritual impacts for generations of Indigenous peoples.

To ingrain equity into philanthropy, funders need better data, shared knowledge, and reciprocal partnerships to inform their work. With this understanding, Candid (formerly Foundation Center and GuideStar) partnered with Native Americans in Philanthropy to envision how to inspire new thinking about philanthropy’s relationship specifically with U.S. Indigenous communities, fill a data and knowledge gap, and shift conversations about diversity and equity from words to action.

Last year, we launched Investing in Native Communities, a free, publicly available website that focuses on philanthropic funding to Native American communities in the United States. In an effort to shine a spotlight on communities that often fall outside mainstream funding, this interactive site includes a funding map, news stories, social media feed, the latest research on funding related to Indigenous peoples, and a historic timeline of the U.S. written from an Indigenous perspective.

The site’s content was created in consultation with Indigenous program officers and foundation staff, who provided insights about the resources funders were looking for and the questions they needed answered in order to increase investment to Native American communities.

These conversations illuminated the need for a ‘Native 101,’ or a place where funders could go to begin their own self-education, without placing that burden on Indigenous-led nonprofits. Nearly everyone we spoke with also emphasised how necessary and vital relationship building is when funding Native communities. And, that building relationships takes time. ‘This work is about building relationships and learning from communities. It’s about letting communities lead and trusting that communities know what they need and providing support and resources to make it happen,’ shared Carly Bad Heart Bull (Flandreau Santee Sioux), Native nations activities manager at the Bush Foundation.

There are, however, reasons for optimism about more effective funding partnerships. In the report accompanying the website, we present significant philanthropic investments that show how foundations are partnering with Indigenous-led organisations. We also share reflections from allies and funders about how philanthropy can be more effective partners with Indigenous communities. Recommendations include:

Indigenous communities have always been engaged in powerful, transformative work, and there is great opportunity for philanthropy to provide intentional and sustained support for Indigenous-led solutions. We hope our tools and analysis promote conversations and shifts in practice that lead to improved data, knowledge sharing, and, ultimately, greater impact. We invite you to explore Investing in Native Communities and welcome suggestions and contributions to the site. 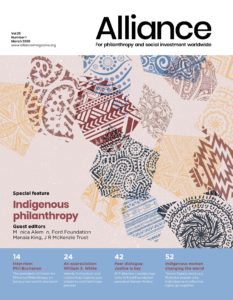 The world of philanthropy has begun to recognise that support and funding for self-determination efforts led by Indigenous Peoples is critical to solving many of today’s complex problems, such as climate change, biodiversity preservation, and sustainable management of natural resources. This ground-breaking special feature will discuss effective ways to partner with Indigenous Peoples and place Indigenous values at the heart of philanthropic practice.