Full disclosure: there was no chat by a fire. Yet, as Autumn is slowly creeping up on London, with dowdy grey skies above and I-should-have-brought-a-bigger-coat level winds pushing through the streets, it was a relief to hurry into The Conduit, filled with people clutching coffees and eager to hear from Regan Ralph, President and CEO of the Fund for Global Human Rights.

Ralph was there to be interviewed by Lisa Witter, Apolitical‘s co-founder. It was interesting to hear Ralph’s own take on the Fund and her belief systems, when so often there is (rightly) more of a narrative which centres grantees and their activities. This talk was instead more personal, as a way to hear from Ralph herself about her career, from her beginnings at Human Rights Watch, her time as Vice President for Health and Reproductive Rights at the National Women’s Law Centre, to her start at the Fund, which she created 17 years ago.

The Fund was created around the idea that ‘there was a rising tide of local activism around the world, but not the resources’. Ralph was keen that these resources be driven closer to the ground, and that the Fund ‘move grants into the hands of local activists to spend on their terms’. Closer to the ground, said Ralph, there is ‘an enormous amount of collaboration, which I take encouragement from’.

Ralph explained to the audience that the Fund helps ‘to fuel the rise of the next wave of activism which is going to come from the ground up’. Referring to this as the pincer approach, Ralph clarified that ‘you need pressure from both the outside and from below, which is where you put the squeeze on the actors in between.’ Supporting grantees isn’t just about giving them money, but about ‘helping them to run their organisation, develop their own tools and skills, how to create an advocacy campaign. We want to create the richest, strongest fabric that we can in those places and find local capacity building enterprises and support them to help local groups.’

This is where human rights activism places such a pivotal role. ‘There’s not a place I have been to where people don’t care about their dignity. Human rights gives people a set of tools to do something about it.’ Talking about the movement itself, Ralph explained that human rights is ‘not the endgame, but the way to it.’ These organisations have such real strengths, argued Ralph, ‘so what they need to continue to be effective is a deep, rich civil society around the world. I think the geopolitical system is in crisis, but within the human rights conversation, it is more of a transition.’

When asked about what she would do to lift everyone’s dignity if she could raise a ‘magic wand’, Ralph replied ‘I think the biggest issue is economic inequality. That’s a cheat answer because it implicates access to justice, functioning systems, accountability and infrastructure. Give people a sense that the system works for them and is available to them, they have a chance at succeeding at democratic experiment… If I didn’t have a sense of physical security, I would not feel in my bones some sense of dignity.’

Lastly, in between interesting tangents about growing up wanting to be a spy, Ralph spoke on two pressing issues: money and technology. For the former, Ralph said that ‘there is only so much money in the world, and the demand on the ground is so much greater than what traditional philanthropy can provide.’ Rather than lump sums, philanthropy needs ‘break into packages that make a difference. Big actors from private foundations to governments are restrained, but that’s where we need to have more of a conversation. There are multiple actors in this space – women’s rights, environmental rights – who are trying to bridge the gap.’ However, says Ralph, power still very much sits with the donors, who make bad decisions and strange rather than support local movements. It’s a serious accusation and we need to be a part of changing that.’ Ralph mentioned that the Fund is currently looking into participatory grantmaking.

Technology, says Ralph, is ‘a two-faced beast. On the one hand, it has made so much more activism possible’ – it’s less expensive, you can network more broadly, people can be mobilised in an instant and can communicate around more traditional forms of censorship – ‘but the flipside is that governments and other actors have far more resources. Surveillance is such a huge issue. People are more at risk now than they’ve been in recent memory, maybe. It feels like it’s getting worse… it is dangerous, and more dangerous because of what surveillance makes possible.’ 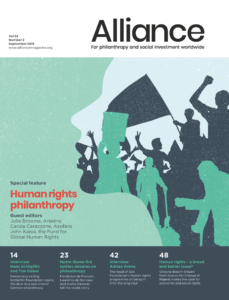 At $2.8 billion per year, Human rights funding amounts to 5 per cent of all giving.

Yet the very idea of the open, liberal, and democratic society underpinned by respect for human rights is under attack. Explore the eco-system of funders and activists stemming the tide.