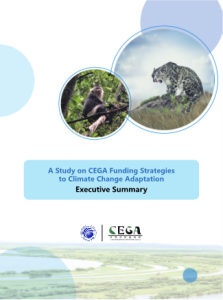 Ruiying Zhang, Executive Director of CEGA, delivered an opening speech, saying that CEGA is initiated by the most influential environmental foundations in China.

‘As climate change is rapidly pushing global climate risks to an extreme today, we realize that it has become rather urgent for environmental grantmakers to explore the ways of studying on and conducting work related to climate change adaptation in a more systematic and efficient manner. On the occasion of COP26, we have completed the CEGA Research Report on the Funding Strategies for Climate Change Adaptation. We are very happy to release the report in your presence today, and listen to your practices in climate change adaptation and your insights into the opportunities for cooperation in this field among all stakeholders’, Zhang said in November.

Mr Ede Ijjasz, Senior Advisor to the Global Center on Adaptation (GCA), offered congratulations on the release of the report in his remarks and agreed on the opinions and suggestions proposed in the report. He noted that China’s experience in climate change adaptation is significant globally, and nature-based solutions (NBS) mentioned in the Report conforms to the trend of combining ‘green’ (i.e., nature-based) and ‘gray’ (i.e., engineering-based) solutions.

Yinlong Xu, Chief Editor of the report and Researcher of the Institute of Environment and Sustainable Development in Agriculture, Chinese Academy of Agricultural Sciences, released and interpreted the report. He said that ‘Climate change adaptation can mitigate losses and support the steady and sustainable development of the society and economy, and its significance will be increasingly prominent as emissions reduction is advanced. To adapt to climate change, it is necessary to transform concepts, put in place clear targets and take concrete actions, while relying on scientific progress and innovation, including the funding mechanism of climate financing.’

Later, representatives from enterprises, public welfare institutions and youth organizations attended the roundtable discussion, where they shared their practices in climate change adaptation and explored the opportunities for cooperation in this field among all stakeholders. Shi Wang, Founder of C-Team and President of Vanke Foundation, offered congratulations on the release of the report in his concluding remarks. He indicated that climate change adaptation calls for the participation and concerted actions of multiple parties, including governments, enterprises, communities and public welfare organizations. He said that ‘I wrote a message when CEGA was launched in 2018, hoping that as a platform, CEGA can play a part on behalf of Chinese public welfare environmental institutions at the UN Climate Change Conference and other international conferences. It seems that they really made it.’

Yaqiang An, Joint Chairperson of CEGA and Secretary-general of Lao Niu Foundation, delivered a speech, noting that climate change adaptation is as important as emissions reduction, and also calls for the joint efforts of the whole society. It has become extremely important for us, i.e., environmental grantmakers, to engage in work related to climate change adaptation in a more systematic and efficient manner. Lei Tian, Project Director of Partnerships for Community Development (Hong Kong) (PCD) Beijing Representative Office, made a statement as the report sponsor, congratulating on the release of the outcomes of the report and making clear the need to deeply advance work in climate change adaptation. The compilation process of the research report — from fuzzy recognition to in-depth exploration — is also a learning process for CEGA members. 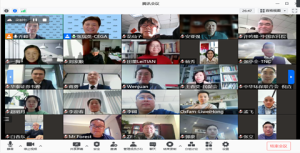 It is believed that the CEGA Research Report on the Funding Strategies for Climate Change Adaptation is the first research item led and rolled out by the public welfare organizations in climate change adaptation in China, and demonstrates the forward-looking consideration and responsibility of Chinese environmental grantmakers for responding to climate change. Featuring strong systematic and theoretical properties, detailed, accurate and concrete cases, the report has greatly enhanced the understanding of CEGA members in climate change adaptation and demonstrated strong guiding significance and reference value.

For more on philanthropy’s role at COP26, click here.

Is it possible to get an electronic copy of the report?