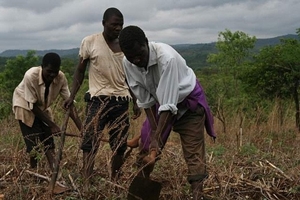 The Brazilian government is stepping up South-South aid, confirming its status as a donor, rather than recipient, country. The United Nations announced in late February that Brazil would provide US$2.37 million for a local food purchasing programme to benefit small farmers and vulnerable people in Ethiopia, Malawi, Mozambique, Niger and Senegal. Brazil now provides assistance to 65 countries. Official development cooperation funds doubled between 2007 and 2008 and tripled from 2009 to 2010, reaching a total of $50 million, 53 per cent of which has gone to countries in Africa and the rest to other Latin American nations. Meanwhile, Brazil plans to dedicate $125 million to technical cooperation over the next three years.

Marco Farani, director of the Brazilian Agency for Cooperation (ABC), acknowledges that the figures are small in comparison with what countries of the North provided, but said that their importance lies in the fact that, unlike aid provided by rich countries which is often managed by consultants and NGOs, it is ‘personalized’. By this, he means the direct involvement of technicians and experts in areas like agriculture, health, governance and education in adapting strategies and programmes that have already been successful in Brazil to other countries. Furthermore, he adds, ‘in our South-South cooperation, we do not impose closed models or solutions. We recognize the experience of the other countries, while sharing our own expertise … we are a developing country, which is why our attitude towards the challenge of development is one of humility, because development is still a challenge for Brazil.’

The food purchasing programme is a good example of this. Carried out by the Food and Agriculture Organisation (FAO) and the World Food Programme (WFP), it draws on the expertise accumulated by Brazil in its own food purchasing programme, PAA, a cornerstone of the country’s Zero Hunger programme. PAA buys agricultural products from small farmers and distributes them to vulnerable groups, including children and adolescents through school feeding programmes. As well as assuaging hunger, therefore, it also strengthens local food production. The programme, in conjunction with other anti-poverty measures, has helped reduce malnutrition by 25 per cent and lifted 24 million people out of extreme poverty, according to statistics produced by the previous Lula administration. The administration put a priority on strengthening solidarity-based South-South cooperation, a policy that has been continued by the Rousseff government. Mauricio Santoro of the Getulio Vargas Foundation in Rio de Janeiro sees a political – as well as a development – rationale for this: ‘to increase Brazil’s influence in other developing countries, particularly in Latin America and Africa … and [the] consolidation of Brazil’s international leadership vis-à-vis nations of the so-called global South.’