Last month, I went to northern Minnesota to stand with water protectors and land defenders in protest against Enbridge’s Line 3 pipeline, which cuts through their sacred lands, disrupting unique ecosystems and ignoring treaty rights of the indigenous communities who have lived there for thousands of years. 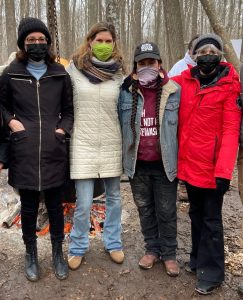 If completed, Line 3 will lock in decades of crude oil production in the Alberta tar sands that the carbon budget simply cannot afford. I saw the earth torn apart and the construction machinery ready to burrow under the headwaters of the Mississippi. I saw law enforcement officers abusing their power to restrict First Amendment rights of American citizens. And I saw communities and grassroots organisers who have been resisting Line 3 for years, putting their bodies on the line between Enbridge’s construction equipment and their sacred lands.

For more than 50 years, the fossil fuel industry has known about, covered up, profited from, and driven the climate crisis. It drills carbon out of the ground, burns it and sells it to be burned again by consumers. The more we burn, the more the industry supplies. It works the other way, too: the more the industry drills, the more it needs to sell, and the more it invests in generating demand and expansion to foreign markets. Along the way, in search of profit, many fossil fuel companies trample on peoples’ rights, lie to the public, and buy the political power that enables them to continue drilling, burning, and selling to burn.

To counter this power, the climate movement needs to channel the kind of unstoppable momentum we have seen in social justice movements throughout history. That means following the lead of communities on the frontlines of climate catastrophe – often the same communities that are adjacent to fossil fuel infrastructure projects and bear the brunt of the industry’s dirty business.

These grassroots organisations, usually BIPOC-led, are what the oil and gas companies fear most. They are also the groups that philanthropy tends to fund the least; less than 2 per cent of global philanthropic funding is dedicated to climate change, and less than 1 per cent of that figure is directed towards BIPOC-led organisations. Now is the time to support these frontline communities and bolster their resources. We must do this using the very levers that have given the industry its unprecedented influence: finance, media, law, and politics.

This strategy works, and the fossil fuel industry is taking note. A 2019 report from Black & Veatch revealed the industry’s primary concern – the most significant barrier to the construction of new fossil fuel infrastructure – is ‘delays from opposition groups.’ The industry now refers to opposition as ‘getting Standing Rocked,’ a reference to the historic protests against the Dakota Access Pipeline. In 2020 alone, the Atlantic Coast Pipeline, the NESE Pipeline, the Frontier Oil Sands Project, and the Constitution Project Pipeline were canceled, the Dakota Access Pipeline and Brownsville LNG Terminals were delayed, and the Formosa Petrochemical Plant Development was withdrawn, due in large part to grassroots resistance led by regular people fighting to protect the communities that they love. Duke Energy and Dominion Energy, when cancelling the Atlantic Coast Pipeline, cited lawsuits from environmentalists filed on behalf of frontline communities that increased development cost from about $5 billion to more than $8 billion, stating ‘this announcement reflects the increasing legal uncertainty that overhangs large-scale energy and industrial infrastructure development in the United States.’ The science is irrefutable: to avert the worst effects of the climate crisis, carbon emissions must be cut in half by 2030, less than 10 years from now. If we continue to support this resistance, we have a chance at meeting our goal by 2030.

It’s time to follow the lead of grassroots organisations and invest in the power of communities on the frontlines of climate catastrophe and environmental injustice, and fund movements on the ground to keep fossil fuels in the ground.

Katie Redford is a human rights lawyer and the Executive Director of Equation Campaign, a ten-year initiative to bring about a safe and just future by funding movements on the ground to keep oil and gas in the ground.