Almost half of men in the UK do not support a good cause or get involved in social action in a typical month.

British men are failing to close the gender generosity gap as they continue to lag behind women in volunteering, donating and sponsoring, new research by the Charities Aid Foundation shows. 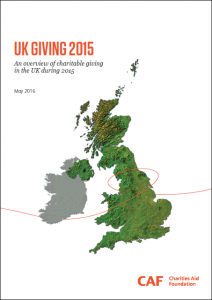 Three in five women (60 per cent) got involved in some form of charitable behaviour in a typical month in 2015, compared with 52 per cent of men.

The most popular way for people in the UK to support a charity was donating money – done by two in five of us (39 per cent) in a typical month – followed by donating goods (20 per cent) and sponsoring someone (9 per cent).

CAF’s annual report on charitable behaviour, UK Giving, also reveals that the youngest generation are the least involved in supporting good causes with less than half of young adults doing so in a typical month (43 per cent).

People of pensionable age were nearly twice as likely to have given money to charity, with 44 per cent of over 65s having done so in the past month, compared with 23 per cent of people aged 16 to 24.

This year’s report estimates that Britons donated a total of £9.6 billion to charity in 2015, suggesting that overall levels of giving may have fallen in the past year.

The in-depth study also found that: