In the wake of the widespread racial justice protests of the past year, environmental funders are reckoning with their history.

For generations, communities of colour have borne the brunt of the pollution of their air, land and water by chemical plants, toxic-waste sites, minxes and refineries. Meanwhile, foundations and donors have poured disproportionate resources into environmental nonprofits headed almost exclusively by white leaders – investments that have reinforced the inequities that have plagued the conservation sector since its earliest days. 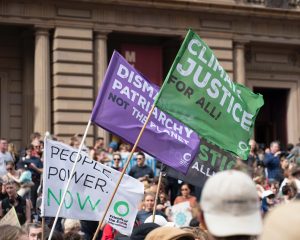 Several encouraging and important new efforts – like the Donors of Color Network’s recently announced push to get large foundations to pledge to direct at least 30 percent of their climate-change grants to groups led by persons of colour – offer hope that philanthropy is finally beginning to embrace climate justice. Other efforts, such as the Hive Fund for Climate and Gender Justice, are raising and granting money to support women’s organisations that are hardest hit and working to address climate, gender, and racial justice.

For those of us who have been working on the front lines to make racial equity a key component of climate change and conservation work, such pronouncements are both overdue and significant. They are also not nearly enough.

If funders are genuinely going to make a lasting impact in communities of colour, they must do more than simply look at the board and executive office makeup of the organisations they intend to support.

Yes, it’s essential to invest in organisations that have leaders of colour. Diversity is an indispensable piece of the equation. But funders and donors must also resist the temptation to make leadership ratios the primary lens for investment decisions. Otherwise, they are merely checking a box.

To move beyond surface-level efforts, funders need to get under the hood, look at the local machinery, and truly get to know environmental nonprofits that have already developed successful, community-based approaches to climate justice. They should also consider the breadth and depth of nonprofits’ relationships and partnerships.

Philanthropy is finally realising that it has been failing in its approach to climate justice. What it does with that realisation will determine whether it can stop the damage before it’s too late.

Since 2014, I’ve served on the board of the Institute for Sustainable Communities (ISC), a high-performing nonprofit that has put equity and climate justice at the center of its work in the U.S. and around the globe. ISC has made incredible strides from its humble beginnings as a white-led organisation to one that has diversified its leadership and staff. Today, ISC deliberately centers its work on shaping equitable, community-led solutions to climate change. In 2020, we hired a new executive director – Deeohn Ferris, a lawyer who has dedicated her career to advance environmental, racial, and economic justice.

As we’ve taken this journey, I’ve seen what’s possible when nonprofits focus their efforts on addressing climate inequities. I’ve also been frustrated by the lack of interest in and investment from foundations and donors in this issue.

A 2020 study by Building Equity & Alignment for Impact and the Tishman Environment and Design Center at The New School found that only 1 percent of environmental grantmaking in the Midwest and Gulf Coast went to environmental justice organisations. This oft-cited number is appalling on its own. But the fact that this is one of the few credible and recent studies on investment in environmental justice also shows both the lack of knowledge that exists in this area and the gross lack of commitment to date by funders in climate equity.

Each day that passes by without addressing this issue puts lives in danger and further widens the already cavernous climate equity gap.

1. Support organisations that embed equity into their work

Foundations have a long history of supporting projects and programs, but they have shown little interest to date in providing general operating support to climate organisations. This must change – and it should start with making investments in nonprofits that have already taken meaningful steps to build a race equity culture and embed equity into their practices.

Culture and values influence the experiences and actions of employees and those who touch the organisation externally. Culture creates a sense of belonging and makes people feel welcome, safe, and respected – which allows them to perform at their highest levels and achieve meaningful results.

With more support, organisations that already have equity-based structures in place can scale their work.

By supporting organisations that are equity focused, funders will also be sending a signal to more traditional nonprofits that have previously been slow to change and adapt. Money ‘talks’ – and funders have the power to ignite positive change across the environmental sector by allocating more of their grantmaking to groups that are deeply committed to equity.

Here in the United States, climate change work has focused largely on adaptation. In other parts of the world, nonprofits and government have focused their efforts on mitigation. As a result, nonprofits that work on climate justice on a global scale have already learned important lessons that can help influence approaches domestically.

At ISC, we work in countries like China, India, and Bangladesh in partnership with national and local government, companies, workers and migrant workers, and farmers to create sustainable manufacturing practices, advance gender equality, and upward mobility. And we’ve taken what we’ve learned and applied the lessons to help U.S. communities adapt to the changing climate and create new opportunities to help women and communities of colour gain opportunities that have historically been out of their reach.

Impact does not come through top-down approaches. This is especially true in climate work, where the most promising efforts come from organisations that listen to and understand community and local needs.

Funders will see faster results if they invest in nonprofits that take community-based approaches to focus on the racial, economic, and social root causes of the environmental and health impacts that hit people of colour and other marginalised groups the hardest. As funders search for ways to address climate change on a large scale, they should look to embrace and replicate community-driven approaches.

4. Empower the people in the community

Philanthropy must cede control and avoid attaching strings to funding that interfere with autonomy. It must also recognise that philanthropy cannot do this alone. By working with groups that develop and support local leaders, funders can help advance critical policy solutions.

For funders who already have a track record in environment and climate change, it’s important to remember that the journey will be long – and it will require an ongoing commitment to learn and adapt.

While it’s important to identify and support the nonprofits that are doing great work, those of us who are committed to environmental justice should never stop seeking out and listening to new voices. These perspectives should come not just from ‘professionals’ who lead environmental nonprofits, but also those who live and work in communities most impacted by the disastrous environmental policies and practices of the past.

True environmental justice will require more than a single approach. We applaud and support efforts to fund organisations with diverse leadership. But we urge funders and donors not to stop there.

Instead, we will see our communities of colour become more environmentally healthy and sustainable when philanthropy takes steps to understand and learn from those already doing good work in these communities. Such partnerships are always based on shared power and trust.

Philanthropy is finally realising that it has been failing in its approach to climate justice. What it does with that realisation will determine whether it can stop the damage before it’s too late.

The Right Rev. Eugene Taylor Sutton is Bishop of the Episcopal Diocese of Maryland, based in Baltimore. Since 2014, he has served on the board of the Institute for Sustainable Communities.