Global human rights funding is up, but for certain regions and groups it has decreased

Global funding for human rights is increasing, but grants are dispersed unevenly across the world, leaving major gaps in the field. 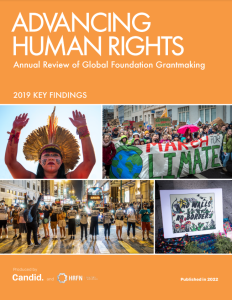 A new report, out today, from Human Rights Funders Network and Candid found that there was a 10 per cent increase in human rights grants dollars in 2019 on the previous year. The total amount of human rights funding in 2019 – $4.1 billion – is a 242 per cent increase on the sum allocated to the issue a decade ago.

Candid and HRFN’s research analyse the state of human rights funding before the Covid pandemic, which they acknowledge have led to ‘immense changes’ since. Other reports, analysing pandemic response, response to the war in Ukraine, and looking at racial equity commitments, provide snapshots into what has happened in the field over the past 3 years, but Advancing Human Rights gives a comprehensive analysis.

An overall increase, but where are the decreases?

While 2019 saw a significant step forward in the increase of total funding, gaps remain. The research found that there are considerable regional funding disparities. In Sub-Saharan Africa, human rights funding declined for a second year in a row – and before that, it had been stagnant. The global increase came from North America, where several donors with large portfolios have substantially increased their human rights programmes.

The research also found that – amongst the increase in grant dollars allocated – funding for particular groups decreased. Indigenous peoples, human rights defenders, and children and youth all received less funding in 2019 than previously.

Candid and HRFN’s research also found that the number of funders that made human rights grants decreased by 8 per cent between 2018 and 2019. According to the report, this decrease came from the number of one-off grants from American foundations decreasing – but it was also due in part to the researchers using a more rigorous methodology to decide who counts as a human rights funder.

Funders outside of North America and Europe are stepping up 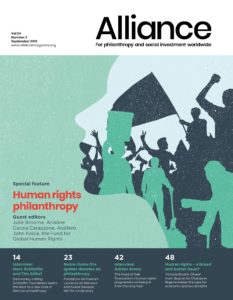 For more on human rights and philanthropy, check out Alliance‘s issue on the subject.

According to the report, 85 per cent of human rights funders are located in North America – a reflection of the philanthropic field where wealth is disproportionately held in the Global North. But the percentage of funders based in the Global South and East are increasing, as is their funding.

Of the 761 funders analysed, 47 were based in the Global South and East. This was a 24 per cent increase over the previous year.

The proportion of funding that is controlled by Global South and East funders continues to hover at around one per cent of total human rights grant dollars, but a notable three-quarters of these foundations increased their grantmaking over the period analysed, the report found.

Global South and East funders represent a vital source of resourcing for locally led initiatives, with 93 per cent of grants by these funders staying within their regions. This increase in giving by regional Global South funders is especially significant, given the uneven distribution of human rights grant dollars across different parts of the world.

Being in a network matters

The research also found that network members offered more flexible funding than other human rights donors, giving nearly 40 per cent of their funding as core support as compared to 15 per cent of the funding from non-members.

But interestingly, members of human rights funder networks trail behind non-members in the length of grants. The average length of member grants was 14.6 months – three months shorter than non-member grants at 17.5 months.

A picture over time

Candid and HRFN have been analysing the human rights funding picture over the last twelve years. This year’s report is the tenth in that time. Over time, a picture of a field increasing in resources and complexity has emerged.

In 2010, the total of human rights funding was $1.2 billion. In 2019, it had grown to $4.1 billion. Major funders in this space include the Ford and MacArthur Foundation, which have both significantly increased their human rights portfolios over the last decade. In the Global South and East, the top funders include Argentina’s Fondo de Mujeres del Sur, DRC’s Fonds pour les Femmes Congolaises, and the Africa branch of the Urgent Action Fund located in Kenya.