On July 11, 2016, the International Human Rights Funders Group (IHRFG) brought thirty-seven grantmakers together for their thought-provoking Institute on “The Sustainable Development Goals (SDGs): Why They Matter for Human Rights and How Funders Can Engage.”  One of the central questions on hand for funders: what are the most important entry points to ensure that SDG implementation contributes to the realization of human rights?

With similarities to progress for disability rights, women’s rights, and climate justice, an example for children’s rights came from the work of the Elevate Children Funders Group.  Its Agenda 2030 Working Group funded a concerted advocacy push in 2014-2015 that led directly to the inclusion of SDG Target 16.2, the first explicit call within a global development framework to end all violence against girls and boys.  This new mandate puts violence prevention on the priority agenda for every country’s development planning and investments, joining the Convention on the Rights of the Child’s parallel legal obligations for nearly all countries.

The SDGs have inspired a dazzling array of new opportunities and vehicles for action.  The Global Partnership to End Violence Against Children was formally launched during the High-level Political Forum on Sustainable Development the day after IHRFG’s Institute, for example.  Underpinned by children’s rights, the Partnership is a collective worldwide platform for stakeholders at every level to meet the SDGs’ mandate to end violence against children, and it fills a critical void in the field’s landscape.  An independent but associated Fund to End Violence against Children will help resource the Partnership’s strategy, driven primarily by bilateral donors such as the UK government. 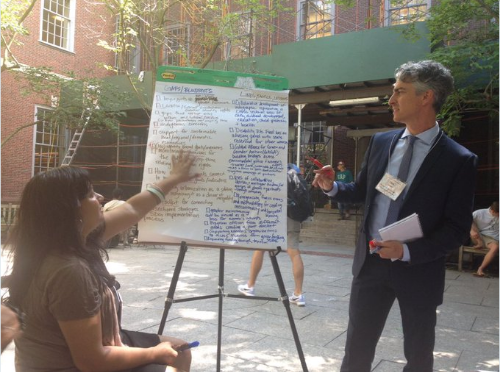 During the IHRFG Institute, Théophane Nikyèma, Executive Director of the African Child Policy Forum, spoke eloquently to the need for funders to understand country- and regional-level development priorities and to engage meaningfully with respective stakeholders, including civil society, for their effective implementation.  Referring to the African context, he described such engagement as an entry point for meaningful change and attainment of the SDGs.

The SDGs’ universal mandate to end violence against children is actually reaffirmed by the commitment of African leaders to their own enunciated sustainable development priorities (see the African Union’s Agenda 2063), including those focused on children.  It is no accident that Tanzania’s Minister of Health co-chairs the new Global Partnership to End Violence Against Children.

In this sense, the SDGs can help generate a virtuous cycle where global, regional, and local initiatives alternate in creating new opportunities to push the other levels forward.  In different ways across women’s rights, disability rights, climate justice, and children’s rights, funders recognized and took advantage of the SDGs’ early promise and groomed this virtuous cycle.  First they provided critical supports towards strong, clear, universal mandates, and then helped lay the groundwork for successful implementation to meet those SDG mandates.

Now the hard work of implementation begins, and that’s precisely where IHRFG’s Institute gave voice to some of the greatest concerns.  The virtuous cycle may still falter because of ambiguities surrounding country-level roll-out; watered-down indicators and weak data capacity; absence of accountability or enforcement mechanisms; and lack of clarity on financing, among other challenges.

Returning to the example of ending violence against children, several funders are planning a new pooled fund to help spark implementation efforts.  The tentatively-named Catalytic Fund asserts that private foundations are uniquely-positioned to envision what might seem impossible and take the bold leaps of faith needed to get there.  While keeping a critical eye on the SDGs’ limitations, the Fund intends to invest in cutting-edge work that embraces the SDGs’ opportunities to break silos, reframe issues, and unleash resources that would not otherwise be there.  That work includes lifting up girls’ and boys’ leadership to hold governments accountable for their commitments to end all violence against children.  Together, the Catalytic Fund donors hope to accelerate – and not allow to languish – the virtuous cycle of positive change across global-regional-local levels.