In search of digital civil society around the world

I recently had the opportunity to discuss the role of digital data and my ideas about digital civil society in Beijing, China and São Paolo, Brazil. Some reflections:

Beijing – the day before this photo was taken I joined Maria Rendon, of USAID and Bin Pei of the Gates Foundation at an event hosted by the Stanford Center on Philanthropy and Civil Society. We were there to talk about data and digital civil society. (It took place on the other side of the wall in the photo – other than location there is no connection to Mrs. Obama). We drew attention to the many ways digital data are becoming part of the emergent nongovernmental sector in China. We heard from the China Foundation Center about its plans to open up the data it collects (all of which is digital). The level of registration and oversight for NGOs in China creates a robust digital trail of information, allowing for much more robust data gathering on civil society than is possible in other parts of the world.

Brazil – 25 hours of flying and half a 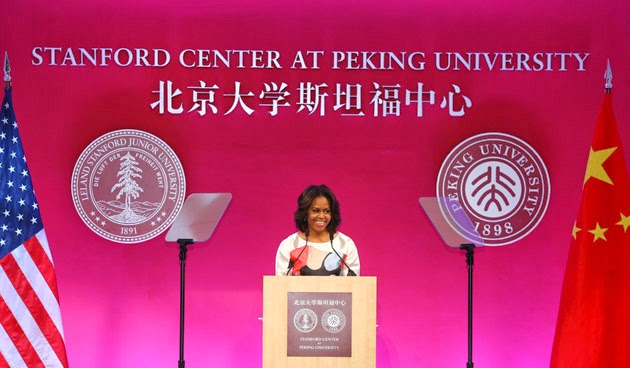 world away I found myself at the GIFE Conference in São Paolo. Brazil has a disbursed, diverse, fragmented economy of civil organizations – from global NGOs to political activist networks. Brazil is home to a vital, vibrant, messy and confusing social economy – it’s a great place to think about what it would take to map such a space, and all the different implications of that economy as it goes digital. Here are the slides I used to get us started:

Registration and oversight of these organizations or networks is very different from that in China – and I repeatedly heard funders, nonprofit leaders, financiers, and scholars bemoan the lack of comparable data about the sector. There is a working group of leaders from the sector that wants to remedy this situation, possibly by developing a Brazilian “Blueprint” such as the one I write every year. This is very exciting and I hope it comes to pass.

Here’s the deck of “working examples” I used to jumpstart a conversation on how we are using  digital data to create new forms of civil society. Note – these are deliberately scattershot, I was trying for a wide range of data types, tools and uses. Turning these working examples into a typology or framework will require many more examples and some more time. I welcome your input:

In both Brazil and China I had the chance to tout the state of digital data on civil society in Canada. The country collects data on foundations and nonprofits electronically, makes it open and machine readable in useful time frames, allowing companies such as ajah.ca to use those data feeds to produce search tools that are really useful and collective efforts such as PoweredByData* that provide models for the rest of us.

I didn’t really get to travel the globe looking for digital civil society (but I’d love to if anyone wants to foot the bill or host me). We need a global conversation about data, social change, and digital civil society – including examples, challenges, new norms, and opportunities from all over the world. The Markets For Good platform and Feedback Labs are two places these conversations can be catalyzed and captured – do you know of others? I have been in touch with folks at Betterplace Labs in Berlin – and they DID go around the globe as part of their Lab Around the World Tour. I’m looking forward to learning more about what they learned and helping share it more broadly. Stay tuned.

*I am an unpaid independent advisor to this effort.

Lucy Bernholz,  is a visiting scholar at Stanford University, where she co-leads the Digital Civil Society Lab, and at the David and Lucile Packard Foundation. She writes about all things digitally philanthropic at philanthropy2173.com.

This article was originally published on the Philanthropy 2173, on 04 April 2014. The original article can be found here>