India’s wealthy give less than 1% to philanthropy 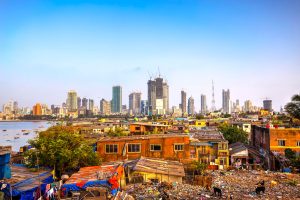 A view of the Mumbai skyline, illustrating the extremes of wealth and poverty. Photo credit: Shutterstock.

The research notes that the total sum of money ultra-high-net-worth give to philanthropy has increased, but giving as a percentage of net wealth has declined overall. One reason is a steep increase in the wealth of UHNIs since the pandemic began, yet relative stability in their giving year to year. However, if wealthy Indians contributed the same percentage as their Chinese counterparts, they would have donated as much as $1.3 billion more. – and in comparison to wealthy Americans, they would have donated $22.3 billion, according to the report.

This slowed level of giving comes at a time when India is facing a glaring deficit in social sector funding and more than 200 million Indians have been pushed into poverty by the Covid-19 pandemic.

The analysis is broadly based on the statistics available in the HURUN donor database. Established in 1998, Hurun is a London-based company known for evaluating the wealthiest individuals in the world.

To read the report or learn more about the research, visit bain.com.