When Liz McKeon joined the IKEA Foundation[1] in 2014, the organisation’s climate giving strategy was just taking root. In the years following, Liz has worked to scale funding climate related programs from $1.5 million to $36 million to cover a wide range of solutions and geographies. After the foundation officially established its Climate Action portfolio in 2018, Liz began building a team with two colleagues joining in 2019 and one more recruitment on the way. 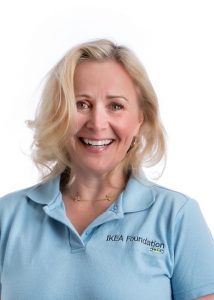 ClimateWork’s Director of Development Jennifer Alley and Director of Marketing and Communications Patty Harper sat down with Liz (virtually, of course!) to discuss IKEA Foundation’s climate journey and how ClimateWorks helped scale their impact.

Jennifer Alley and Patty Harper: Tell us a little bit about yourself. Why are you passionate about climate and what guides you in this work?

Liz McKeon: I am an American living in Europe and have been in and out of philanthropy since 1992, when I started my first job with the McArthur Foundation. I’m a bit of a square peg in the climate realm since I’m not a climate expert and haven’t been in the field from the beginning. You could call me a Sovietologist by training – I spent many years working in the Soviet Union, and then (post-collapse) in Russia.

My professional life has focused on issues that are essentially about the changing nature of the political economy and personal behavior, two themes that are so relevant to the climate challenge now! I also did a teaching assignment in apartheid in South Africa, which helped me understand structural inequality, and now motivates me to tackle the climate challenge from that angle as well.

Tell us about the IKEA Foundation’s journey into climate philanthropy.

It’s an interesting story. The foundation was set-up as a children’s foundation in the 1980s and started out in earnest in 2009. The climate impetus was a stroke of leadership coming from our board. The sons of IKEA’s founder, Ingvar Kamprad, understood the reality that we are not going to survive if we don’t take care of the planet. They also deeply believe that responsible businesses can lead the way in driving solutions.

In 2014, the foundation pledged to put businesses at the forefront of fighting climate change by launching We Mean Business, a coalition of organisations that advise companies on ways they can become more sustainable and responsible. I joined soon after that decision was made. Setting up the We Mean Business coalition and helping them launch was one of my first tasks.

It wasn’t until 2018 that we were able to reorganise the strategy and rethink how we can still hold true to our value of making the world better for kids while also focusing on other issues.

We focused on two strategies: protecting the planet and helping families afford a better everyday life.

That was the beginning of a new portfolio structure for the IKEA Foundation and we’ve been ramping up our climate giving ever since.

What were some of the projects that you were working on before you started collaborating with ClimateWorks?

Our climate commitment started in 2014 with the creation of the We Mean Business coalition. We also recognised the need for broad-based public mobilisation early on, so our initial funding was also geared to launch something called the Here Now campaign. This later became the Purpose Climate Lab, whose work is centered around building momentum for change and accelerating climate solutions through advocacy and partnerships.

Tell us about your involvement with ClimateWorks. How were you able to build and grow your giving strategy with us?

Having a non-climate background, one of the first needs I had was to overcome the intellectual challenge of getting up to speed. With ClimateWorks as a partner, I was able to access a vast network of funders and knowledge in order to understand the field quickly – where the funders were in their thinking and approach, and the opportunities and barriers of different solutions. When you’re a small team, you can’t imagine how important it is to get that knowledge quickly to scale your work.

Once the IKEA Foundation’s climate grantmaking work kicked off, I also began to understand that with ClimateWorks, not only can you pinpoint where you can make the most change through their Global Intelligence services, but they will also partner with you in the evolution of your own giving strategy, as well as involve you in the development of their grantmaking programs.

Climate is a fast-paced, fast-moving, and a highly politicised area of social progress, so it needs leadership and consistency, both of which philanthropy can provide.

For instance, our Indonesia work started with mapping out mitigation opportunities and is now evolving to the next phase of action, where we need a ready set of grantees and a coordinated funder effort in the region. ClimateWorks is organising and leading us on both those fronts.

With a small staff, we also knew we couldn’t engage in the transaction cost of giving small grants to the many organisations that are implementing solutions we need across the globe. We needed a partner like ClimateWorks that could build the grantee field and distribute the funds to the most effective groups. So, the ability of ClimateWorks to channel funds to multiple grantees and projects was really helpful.

What are some solutions you’re working on with us?

In our first round of grants, we funded ClimateWorks’ Transportation program, which is working globally to tip the scales on the adoption of electric vehicles. We are also a leading partner in the project to identify opportunities for climate change mitigation philanthropy in Indonesia, a leading country in a region that hasn’t been a focus for philanthropy.

ClimateWorks Global Intelligence is another area we support. By providing insights on both climate change and philanthropic funding, it is helping the funder community act more efficiently and quickly when opportunities arise.

In our second round of grants, we started working closely with the ClimateWorks Finance program and are funding initiatives to shift capital away from fossil-based investments toward more sustainable, green investments.

The climate crisis is upon us in no uncertain terms. What do you think philanthropy can do to avoid the worst impacts of climate change?

I feel incredible impatience when it comes to the climate crisis. Everything that needs to happen should’ve been done yesterday. We are way behind where we need to be. But I do believe that this is a crisis we can overcome. Climate is a fast-paced, fast-moving, and a highly politicised area of social progress, so it needs leadership and consistency, both of which philanthropy can provide.

For instance, I saw early on how we were able to collectively show up at Paris in 2015 to help move the agenda and secure what were some real wins in the Paris Agreement.

I’ve also seen how philanthropy can step in and unite different groups on climate action. The We Mean Business coalition, Purpose Climate Lab, and the Clean Air Fund are great examples of how philanthropy can bring together groups that matter so much to the changes that need to happen at a systematic level.

Sometimes philanthropy is also able to capitalise on a brilliant moment that will not happen again. Europe’s Green New Deal is on the table now and we need to opportunistically move with the speed of that moment and make sure we make the best of it.

What advice would you give to a new funder thinking of climate?

Talk to ClimateWorks. They really understand the strategies needed at a global level. Plus, they have so many relationships and act as the gravitational pull for the community through the data, the reporting, and the conversations that they coordinate across many different regions and subject areas. Not to trivialise it by calling ClimateWorks a ‘fast pass’, but when you are in earnest trying to get a sense of where fellow funders are, where issues stand, and how to deliver the best possible contribution you can make as a single philanthropy, collaboration takes center stage. And ClimateWorks is one of the groups that really brings that collaboration in living form to the table every day.

Editor’s note: Liz McKeon is the Chair of the Alliance Publishing Trust board.