Interview with He Daofeng, winner of the Olga Alexeeva Memorial Prize 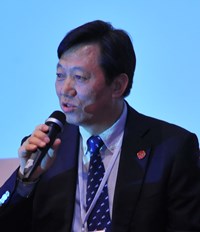 The winner of the Olga Alexeeva Memorial Prize was announced on 27 March at WINGSForum in Istanbul. After the announcement, He Daofeng, who is executive president of the China Foundation for Poverty Alleviation (CFPA) and chair of the China Foundation Center, talked to Caroline Hartnell about philanthropy in China and his own role in its development. Below is the transcript of the interview.

Could you very briefly describe the state of philanthropy in China today? How many genuinely independent foundations are there (as opposed to GONGOs)? Are these mainly corporate foundations or foundations formed by wealthy individuals and their families?

Chinese philanthropy is too complex to describe briefly. There are more than 240,000 registered NGOs including GONGOs (government-organized NGOs) and independent NGOs, plus over 200,000 NPOs, which are involved in various kinds of philanthropic activities.[1]

How much giving to charitable causes is there among ordinary Chinese people?

In 2013, 3,700 foundations raised a total donation of RMB 35 billion (US$ 5.8 billion). Among them, ordinary individuals contributed RMB 7 billion, accounting for 20% of total donations.

What do you see as the main barriers to the expansion of private philanthropy in China?

I think the barriers are very complicated.

Second, lack of religious faith and shared values in society after the huge shocks of the Cultural Revolution and market economic mechanism, influenced by an ideological tide of materialism and money worship.

Fourth, there are not enough good independent NGOs with a good reputation that can mobilize more social resources and deliver more services with effective social interactions with people.

I understand that the China Foundation for Poverty Alleviation, of which you are executive president, is the first GONGO to be transformed into a fully independent foundation. You say in your interview in the Alliance supplement that this was very difficult because you were breaking new ground: ‘If I didn’t tread carefully, I felt it would incur the hostility of many parties, provoke a crisis for the whole sector, and maybe even put us in physical danger.’ Can you tell us about the difficulties you faced and how you overcame them?

The system called the ‘iron rice bowl’ protects people with official identity from any kind of management pressure. This means that nobody, including CEOs of GONGOs, has the right to fire anybody who has a formal official identity except for criminal activity. Therefore people’s relationships are frozen. You cannot let inefficient people leave and get intelligent people in.

In such a system, how can you upgrade the organization’s performance? I transformed the foundation by introducing market rules into the system, including employment. You can imagine that the people who lost their ‘iron rice bowl’ protection hated me and even wanted to kill me. The other 99.9% of GONGOS saw this as rebellion. So I felt lonely and under great social pressure for a long time under such circumstances. In overcoming the barriers, certain things helped me, including: my deep faith in the social reform of China; persuading the government to sign a contract with me to protect me; doing my best to do everything as a true volunteer, and not getting any payment from the foundation; not speaking to the mass media. 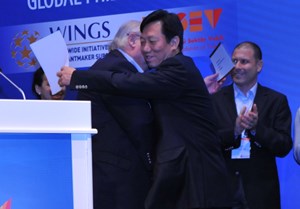 You talk in your Alliance interview about deciding as a young man to focus on ‘promoting philanthropy and cultivating social self-governance, the civil society spirit and citizen obligation’. How revolutionary is this approach in China?

Looking at the experience of modernization in East Asia countries such as Japan, Taiwan (of China) and South Korea, fostering of social self-governance organizations and civil society must follow transformation of the economic structure. China is at the turning point of civil society transformation now (namely the urbanization rate is over 50%). More and more people feel unhappy when simply making more money instead of helping others by means of social self-governance organizations. The new generation begin to seek for significant meaning in life. So citizen participation and civil society development is inevitable. Some things are happening now. A new social self-governance movement has been developing in China in recent years.

The China Foundation for Poverty Alleviation works across borders, in Africa, Indonesia, Kenya and Cambodia? Can you tell us a bit about this? How many Chinese foundations support causes outside China?

CFPA has been providing cross-border aid to vulnerable groups and communities since 2005, including aid to victims of the tsunami in Indonesia, earthquakes in Pakistan and Haiti, the typhoon in Myanmar, hunger in Horn of Africa, building a hospital in Sudan, providing ambulances to Guinea-Bissau, a school feeding programme in Cambodia, etc. The total aid is about $15 million. So far, about 50 foundations are involved in overseas aid to varying degrees, and CFPA is the earliest and the best.

What have you done to encourage the practice of philanthropy both among high net worth individuals and among more modest givers?

I have established two fundraising departments in CFPA since 2006: one targets wealthy individuals and companies in different industries, and the other one targets modest givers. For different targets, we use different methodologies.

Can you tell us about the work of the China Foundation Center, and in particular the Self-Regulation Alliance for Chinese Foundations, in addressing issues of lack of transparency and lack of trust in foundations and NGOs in China and in promoting collaboration and greater democratic self-governance among Chinese foundations.

More open information brings more transparency and higher public reputation. In accordance with the collected information, we can do some ranking, comparative study and research, and leadership training by means of mass media, to push China’s philanthropy sector to be transparent. Based on this platform, we can call on some foundations which value their public reputation to collaborate as the Self-Regulation Alliance for Chinese Foundations

You have also been instrumental in bringing a group of experts to help the provincial government of Yunnan to develop its first local charity law and in promoting media coverage of philanthropy. Taken all together, your work has done a great deal to help to make philanthropy into a more integral part of life in China. What is needed now to modernize philanthropy in China?

China’s new generation leaders have been firmly determined to deepen reform of the economic system and social restructuring, but power struggles among ministers have always been barriers to deepening reform at every turning point since 1978. Therefore reform pioneers have always sought cooperation with provincial government to break down barriers as a kind of response to the top leaders in the central government. This has always been the political wisdom of reform in China.

So I made use of this kind of political wisdom in Yunnan province to respond to President Xi Jinping and Premier Li Keqiang’s social sector reform policy. It means that the Yunnan Provincial Government will withdraw from the role of collecting and being the recipient of donations, and will encourage social donation giving to equal NGOS instead of to local government by issuing new legislation.

For modernization of philanthropy and civil society in China, we need to deepen reform as follows:

So we have a long way to go. We must go the way of striving for social civilization upgrading and for changing of the generations, building a modern civil society at this turning point of modernization of China. We must stand for the deepening reform of China’s rigid social mechanism.

Do you have any plan for the prize money?

I have never thought about applying for any kind of reward or thought that what I do is worth any kind of reward. Today I am here surprised at what has happened right now. I don’t know what to say at this moment. I do not think what I have done is as good as your prize committee has judged. I am only one common person among thousands of contributors in the philanthropy sector. I just do some little things that I ought to do following my heart.

Therefore I think that the prize is not for me; it is for everybody who wants and tries to do something to help someone or to change our painful world. The prize is just to encourage me, my colleagues and everybody in this field to learn from Olga, to adopt the spiritual heritage Olga left us, to contribute more, and to do our best for world peace, goodness, honesty, beauty and all philanthropy. So I will represent your love by donating the prize money to the Hungry Children Program of the China Foundation for Poverty Alleviation. Thanks again!