Investment in donor-advised giving funds increases by a third

How has global philanthropy changed month by month?

Assessing the impact of climate litigation

The Phoenix way: lessons from the pandemic

Philanthropy’s role in overcoming the pandemic through R&I

Philanthropists invested almost £500m in donor-advised giving funds in 2016-17, a 33 per cent increase on the previous year. 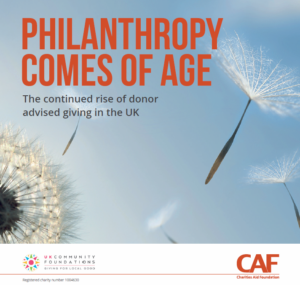 According to a new report by the Charities Aid Foundation, the amount of money granted to charities has seen an upward trend over the last four years, rising to £331.7 million in 2016-17 and representing an increase of 19 per cent year on year. Contributions into DAFs reached a new high of over £495 million.

‘It is very welcome to see strong and continued growth, reflecting the increase in awareness among individuals, organisations and advisers that donor-advised giving funds provide an easy, flexible and effective way to give to good causes.

“Of course it is not just the level of contributions to these funds which matters but critically, the use made of those funds. This means ensuring that donations get to the right place and are used in the way intended, especially in parts of the world where the need is so acute.’

Despite this increase in grants, however, 67 per cent of the money taken into donor funds was paid out – an 8 per cent decrease since the previous year.