This article originally appeared on the IHRFG‘s blog, on 1 December 2016. The original article can be found here.

Following the IHRFG/Ariadne Funder Learning Visit to Jordan, the Middle East and North Africa (MENA) Funders Working Group sponsored a meeting, hosted by the King Baudouin Foundation United States, for participants to share key takeaways from the visit and discuss potential avenues for collaboration on issues related to forced migration throughout the region.

Beth Fernandez of the Sigrid Rausing Trust discussed the challenges that restrictive laws are having on human rights organizations and said that private philanthropy and donor countries should work with civil society to respond effectively. 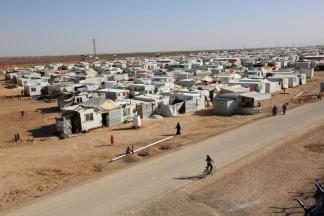 It is clear, she said, that the Syrian conflict and anti-terrorism measures has profoundly impacted the functionality of Jordanian civil society as new restrictive laws have gained traction.

For example, a new mechanism for foreign funding was introduced that requires NGOs to receive prior permission from the Ministry of Planning and International Cooperation to receive foreign donations, especially to support programs related to the Jordan Response Platform to the Syrian Crisis and the country’s own national and development goals.

In addition to gaining approval from the Ministry of Planning and International Cooperation, every foreign donation must also be approved by the Ministry of Justice and any other Ministry with functions that are relevant to the program in question.

This approval process is slow and arduous, taking a minimum of six-months according to several local Jordanian civil society actors. Funders would need to explore ways to address increasing restrictions by working closely with local intermediaries and Jordanian civil society to develop context-specific responses. In addition, it’s critical that the United States and European Union member states, who have significant influence as donors, express their concerns with these new restrictions.

Beth also stressed the importance of advocacy and legal aid to support economic rights of refugees but also the difficulties in doing this in the midst of a weak Jordanian economy.

The Syrian conflict and resulting refugee influx into Jordan has significantly impacted the Jordanian economy, infrastructure, and resources, and children and youth are bearing the greatest burden. Unemployment, particularly youth unemployment, is on the rise. As of December 2015, nearly 40 percent of Syrian children ages 6-18 in Jordan remained out of school. As the international community comes to the terms with the prolonged nature of the Syrian conflict and resulting refugee crisis, there is a greater need for advocacy regarding the right to work.

Advocating for a blanket right to work for refugees in Jordan might be hard to achieve, Beth stated, but it is possible for funders to advocate for legal status, increased access to health and protection, and increased access to work permits. Coupled with this advocacy must be a renewed commitment to support legal assistance for refugees as there is very limited understanding of legal rights among this vulnerable population.

Catherine Zennström of Zennström Philanthropies spoke to how the Syrian refugee crisis has shifted from being an emergency situation requiring immediate, humanitarian relief to a prolonged, development challenge requiring a longer-term strategy.

In March of this year, the 5,000th child was born in Zaatari Camp’s delivery clinic. Every day, there are 2-3 births in Zaatari, many of whom are born to mothers under the age of 18. It’s clear that this is no longer an emergency situation; this is a long-term issue that requires more of a development approach than a humanitarian one.

With somewhere between 3-4 million refugees of 46 different nationalities, Jordan is facing serious challenges with respect to its economy, natural resources, and education and health systems. The impact of forced displacement has had immense impacts on Syrian children in Jordan.

An estimated 600,000 Syrian refugee children are completely ineligible for formal schooling due to a Jordanian law preventing children who have been out of school for three or more years from re-enrolling. As the Syrian crisis extends into a sixth year, this number is expected to increase. Jordan is a “locked-in country,” with very few industries and exports. According to the World Bank, Syrian refugees have cost Jordan more than $2.5 billion a year, amounting to 6% of GDP and 25% of the government’s annual revenue.

Chandra Alexandre of the Global Fund for Women cited the increased vulnerability of women refugees in Jordan and stressed the importance of supporting women’s participation in the public sphere.

After spending a day visiting the Wadi Seer Training Center, a technical and vocational training center, and Talbieh Refugee Camp, both administered by the UN Relief and Works Agency for Palestinian Refugees (UNRWA), it was clear that progress has been made in educating Palestinian refugees and empowering young girls. This sparked a few questions: How can we support these girls to take their confidence and skills in the public sphere? How can we make sure they have a voice in their present and future and are not voiceless recipients of aid?

What lessons can be applied to the Syrian refugee crisis from UNRWA’s successes educating Palestinian refugees and empowering young Palestinian girls? In addition, what can we learn from the challenges that our partners on the ground are reporting vis-à-vis some of the approaches followed by UNRWA, UNHCR, and other international agencies?

Created in 1950, UNRWA’s mandate is to provide assistance and protection to a population of over 5 million registered Palestinian refugees (approximately 2.1 million of whom are living in Jordan) pending a just solution to their plight. Today, most Palestinians and their descendants in Jordan are fully naturalized citizens with access to basic education, health care, and relief and social services – basic services that are not available to other refugee populations living in Jordan, including Syrian refugees (who are under the charge of UNHCR and not UNRWA). 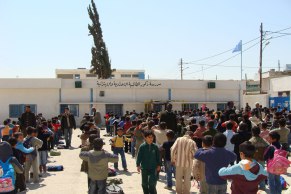 While at the Talbieh Refugee Camp, participants had an opportunity to speak with UNRWA’s Health Chief and Deputy Field Chief of Education, but the most engaging part of the visit was meeting with the newly elected student parliamentarians.

The contrast was stark – while the male Health Chief spoke about reproductive health on behalf of (and in absence of) his female patients, the girls on the student parliament proudly and confidently shared their struggles, hopes, and dreams for their futures.

Clearly, UNRWA in Jordan has had immense success in terms of educational attainment. A rights-based approach and curricula has been adopted by all UNRWA schools throughout the region, which has resulted in a real impact on the lives of Palestinian children attending these schools as well as the community-at-large.

Despite UNRWA’s accomplishments, female refugees continue to face increased vulnerability in Jordan. Female refugees are held back from participating in the public sphere due to religious and cultural limitations. Jordan is also one of 27 countries that limit a woman’s ability to confer citizenship to her child or spouse.

Syrian women’s inability to confer nationality to their children combined with the massive displacement resulting from the conflict has resulted in a situation where a generation of Syrian children born abroad is at risk of being stateless.

Another key challenge is the lack of involvement of displaced women and local women human rights groups in decision-making inside the camps and the fact that most services provided by UN agencies and other international organizations are limited to a vast extent to the provision of services. While the importance of these services is undeniable, the sheer number of affected populations necessitates that the international community shift its approach towards refugees from one of service provision to one where the development of agency, leadership, and sustainability is at the heart of all efforts.

Global Fund for Women is focused on supporting movements that create systemic change. Building on the lessons learned during the Learning Visit, the Fund will focus funding on promoting women’s agency and protection, particularly within the refugee camps.

Our ultimate goal is for displaced women and girls to be equipped with the tools and authority/power that allows them to advocate for their rights and the rights of their communities in national, regional, and international settings. There are also opportunities for transferable learning across the region.

View IHRFG and Ariadne’s Key Takeaways document, which addresses the context for the 2016 Learning Visit, human rights and funding challenges in Jordan, and a list of practical recommendations for funders working on the refugee crisis, both in the Jordanian context and more broadly.