Letter to the editor: Trust-based philanthropy is not a myth, it’s a solution

Like Simon Sommer says of himself, I may not know what trust-based philanthropy is. But I have a good idea of where he goes wrong. 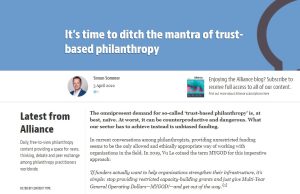 Let’s set aside the broad generalizations (‘unrestricted funding seems to be the only [kind] allowed…’; trust-based philanthropy is a myth because – gotcha! – its proponents also do some due diligence). Set aside the idea that only trust-based philanthropists are biased in favour of those they already fund. And please, I am sure that nobody is saying that they shouldn’t be accountable for delivering results. I am getting the sneaking suspicion that, once the stuffing of the straw man is on the floor, the TBPs that come out from behind it may have plenty in common with Sommer’s argument.

The reason for trust-based philanthropy, as my grandma would say, is that more heads are better than fewer. There is a real danger, with all the power that philanthropy has, of thinking that problems are solved when we ‘Pave the way together’, and come up with the right One Big Idea, the true theory of change, that magic bullet. The reason to trust grantees and get out of the way is that there is no one strategy that will solve any of the trenchant problems of injustice and human suffering that we face. By giving many grantees the flexibility to respond creatively, better strategies will emerge; more than this, multiple strategies that may even seem incompatible can be more effective in concert than anyone alone. We need to be moving forward on many fronts to make the change we need. This does not mean being uncritical as a grantmaker; it means trusting the grantees once your decision has been made.

Trust, and you may fail; you may sometimes feel betrayed. But you will also create a more vibrant, rapidly evolving ecosystem of social change actors who are more likely, in the aggregate, to get things done if they have the freedom to experiment.

Devon Kearney
Fundraiser and consultant with more than 20 years working in the nonprofit social justice sector.

See also: Is the trust-based philanthropy bubble about to burst? by Alliance Executive Editor Charles Keidan.