Funding for groups working on LGBTI issues has been growing steadily – according to a report from the Global Philanthropy Project, it grew by three per cent from 2019 to 2020. However, it’s a small percentage of overall global funding and dwarfed by funding to the anti-LGBTI movement. 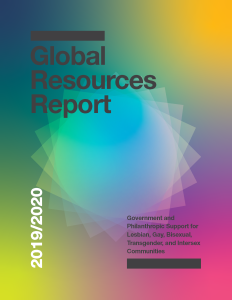 ‘2019–2020 Global Resources Report: Government & Philanthropic Support for Lesbian, Gay, Bisexual, Transgender, and Intersex Communities (2022)’ is a regular report produced by the Global Philanthropy Project. This year’s is the most comprehensive report to date on the state of global LGBTI issues. It analyses data on almost 16,000 grants awarded by nearly 500 foundations, intermediary NGOs, and corporations over the period.

‘In the past two years, we have witnessed a series of humanitarian crises causing forced migration with specific impacts and vulnerabilities for LGBTI communities. And if that wasn’t enough, those who oppose LGBTI human rights have leveraged the crises we all face to escalate their attacks,’ said Matthew Hart, Director of Global Philanthropy Project.

According to the report, though grants for LGBTI groups are distributed globally, funding for groups in the United States represented 57 per cent of the global total in 2019-2020. Global Philanthropy Project was established in 2009 to advocate for increased funding to the Global South and East, in recognition of this ongoing global funding inequity, and continues to mobilize grantmakers to address these funding gaps, it said.

Funding for LGBTI issues is relatively concentrated, with the top 10 funders accounting for 30 per cent of all LGBTI global funding. The same goes for anti-LGBTI groups – just one organisation, the Christian Broadcast Network, reported expenses of over $622 million in the period surveyed, contrasted with the $576 million that the entire global LGBTI movement received during the same years.

‘LGBTI communities face urgent conditions, and grantmakers must mobilize together to financially resource the movements that can meet those needs,’ Hart said.