This year’s Commission of the Status of Women (CSW)’s theme was ‘Achieving gender equality and the empowerment of all women and girls in the context of climate change, environmental and disaster risk reduction policies and programmes’. Looking at this as an insider in the funding world as well as an activist, I am appreciative of the imperative value of promoting environmental justice to advance gender equality.

In a background paper prepared for CSW66, Bernadette Resurrección argues that one potential pathway of political action to bring about transformation towards a more feminist-caring world is to actively engage with grassroots-led and social movement collectives who seek gender and climate justice. One would ask, what are the necessary conditions to form such alliances and relations of support? Based on my experiences at Urgent Action Fund-Africa, I think funding is one aspect of enabling such connections.

My concern is that only a fraction of global funding is supporting African women whose lives and livelihoods are affected by climate change and environmental degradation. Interestingly, the climate, environment and gender are intersectional and yet according to UNDP, only .01 per cent of all worldwide grant dollars support projects that address both climate change and women’s rights – a clear reflection of a critical funding gap. In this piece, I argue for radically different funding realities for environmental justice activists in Africa. Grassroots organizations focusing on climate change and environmental justice, often led by African women, are chronically underfunded. In my view, a practical start to changing funding practices and relations is very simple: improving our listening.

The impact of mining on communities 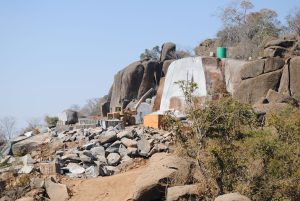 A mine in Mutoko, Zimbabwe. Photo credit: Shutterstock.

In Zimbabwe, where I live, I started witnessing the devastating consequences of forced displacements of women and communities in areas like Marange (Manicaland Province) where diamonds were discovered around 2006. On the radio, I listened to community members opposing the mining and challenging the promises of jobs and benefits used by investors to get people on their side. I remember the news headlines around 2011 when the mining companies backed up by government went ahead with the mining operations and displaced 4321 families. Now, ten years later I see people who survived on agriculture and artisanal mining living in poverty in areas unsuited for agriculture. People live far from schools and clinics and lost access to their ancestral lands.

The forced displacement of African communities because of mining or local development raises many questions. Who is in control of the environment? Who decides what happens to our land and resources? What I learned about environmental justice by listening to the people of Marange is the importance of having agency regarding your environment over the decisions that impact your life. In contrast, to be resettled is one of the most acute expressions of powerlessness because it constitutes a loss of control over one’s physical space.

A case for core funding

The American black feminist writer Audre Lorde said, ‘There is no such thing as a single-issue struggle because we do not live single-issue lives.’ Because communities know what works and what does not work for them, funders should support environmental justice activists and not prescribe how funding is used to further their struggles. Funding is often allocated for specific purposes and can then only be used for those. Through my work at Urgent Action Fund-Africa, I have witnessed what unconditional funding can do to support environmental justice activists, particularly women. As members of communities, they can utilise funds in a way that resonates with people’s everyday lives.

In 2020 for example, UAF-Africa supported the National Association of Professional Environmentalists (NAPE) in Uganda to challenge the Bugoma Forest Reserve being turned into a sugarcane plantation. This leaves thousands of local, indigenous communities who depend on the forest ecosystem for survival stranded and displaced. The group informed the media, the business community, and the legislators including the President, that development that is not people-centred is not development at all and they did not need it. Through their successful ongoing advocacy, filing a court order against the company, Bugoma forest is still standing, and the displacement has been stalled -giving the much-needed interim relief.

What the experience of the women and their communities in the Bugoma Forest Reserve shows is that funders should listen to activists and meet them right where they are. Communities know what injustice is, we need to trust them. UAF-Africa comes from a place of trust, our experience on the continent is that activists and community members like those from Marange and Bugoma Forest know exactly what is just and what is not. They also know the gravity of the injustice they are facing more than any Funder, any outsider NGO coming in, so their reservations on what Investors or governments offer them should be respected as such.

Funders operating from trust show genuine interest in communities’ knowledge, experience, fears, and anxieties so that their support is empathetic to these realities and is not manipulated by a Funder’s version of what works. There is a misconception that community-based groups and sometimes women who are not as ‘educated’ will not be able to fully execute the interventions they outline. In my experience, there are vast talented activists with experiential knowledge which is just limited by a lack of available resources and investment for their work. UAF-Africa has been an ally to land and environmental justice movements by listening and being agile in supporting movements and organisations that are pushing back against environmental and climate injustices in Africa.

Tariro Tandi is a Director of Partnerships & Development at Urgent Action Fund-Africa.

This is a great piece of work Tariro. Women a suffer environmental injustices the most yet are the least to be heard.

The wonan who feels the impact of climate change is not even given an ear to make own decisions regarding what she would want say. Her voice remains mumb and decisions continue to be made for her. The CBOs that are able to reach her are never funded or just receive the bare minimum of the available resources. You couldnt have said it any better Tari. Environmental injustice is real !

Thank you for this amazing piece, Tariro. Funding should always come from a point of trust.