Meet Dhaval Udani, CEO of GiveIndia, one of this year’s Olga Prize finalists 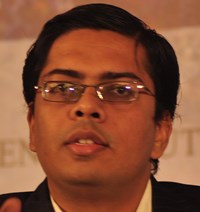 Dhaval Udani started volunteering for GiveIndia seven years ago, typically devoting 10-15 hours a week to it alongside his more than full-time job as a management consultant. Two and a half years later he joined GiveIndia as a staff member, becoming CEO in 2011. When he joined GiveIndia, it was raising $1.5 million from its core activities. Five years later it is raising $5.5 million – in a country where structured and regular online giving by ordinary individuals was unknown until ten  years ago. Not only is http://www.GiveIndia.org one of the first online donation marketplaces in the world but it is also one of the first e-commerce marketplaces in India.

As CEO, Dhaval has initiated India’s largest online fundraising event, the India Giving Challenge, which encourages NGOs to raise money from their supporters, and companies to raise money for NGOs through their employees and customers, with the Challenge offering matching grants to stimulate a sense of competition. Over the last four years, the Challenge has raised $1.6 million. More importantly, the event is a practical lesson for NGOs on how to fundraise effectively. As well as providing matching grants, GiveIndia organizes workshops for NGOs on donor outreach, engagement and retention, and works with them on implementing these lessons during the Challenge.

Other initiatives include partnerships with e-commerce portals across India, such as MakeMyTrip.com, PAYBACK, GroupOn and Snapdeal, which are expected to engage 100,000 new donors every year, and the First Givers’ Club, an indigenous high net worth individual engagement programme which draws in over 100 HNWI families, raising over $2 million in the last financial year. Altogether, GiveIndia has become perhaps the largest source of indigenously raised funds for NGOs; it is expected to raise and disburse over $7 million this year.

Dhaval’s work both as a volunteer for GiveIndia and as its CEO has demonstrated his commitment to philanthropy and his conviction of the power of the internet. Also important is that he has worked through an institutional framework, making sure that the gains and benefits are durable, of particular significance in India where philanthropic initiatives may last only as long as their founder.

In his own words …
‘I started working in the non-profit sector because I wanted to do something valuable outside my working life. GiveIndia contacted me and I began to work for them as a volunteer. You can call that serendipity. After two and a half years, I started working for them full time because I enjoyed the work more than my regular work and because I felt I could achieve more worthwhile things with GiveIndia.

I don’t think in terms of any one big achievement. Our aim is to try to get more people to give and to give more and we are constantly trying to move beyond the benchmarks we set ourselves, so it’s a question of constantly moving forward in small ways. Over the next three years, we have a target of raising $20 million a year. Rather than branching out and trying to do five or even ten new things, we’d like to scale up what we already do while starting two to three new things. But we will be very selective in picking our opportunities because we want each one of these new things to have the potential to raise $3 million in five years. . And once we have picked them, we will go all out to achieve them.

My biggest challenge is to try to find a way to get more passionate and committed people involved, the kind of people I met when I started volunteering at GiveIndia. There are already many of these involved in the social sector, but not enough. Getting the right people is the key thing. Once you have them, other things fall into place.

In terms of developing Indian philanthropy in general, I think the biggest challenges are getting people who are already donors to talk about giving and to persuade others to do it. It’s a cultural thing: people are happy to give, but uncomfortable asking others to give. We also need to ingrain the culture of giving from an early age, so that people see it as a duty, as something you have to do, not something they might or might not do depending on how their income fluctuates.

Finally, the relationship between donors and organizations is a partnership and donors have a right to demand accountability from the NGOs they support. At the moment, many NGOs don’t see reporting to donors as an important part of what they do, more as a necessity. They need to become more professional about this and more ready to do it.’