Meet He Daofeng of the China Foundation Center, another of this year’s Olga Prize finalists 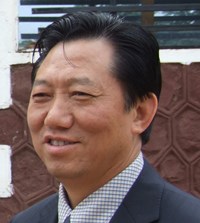 CFPA is the first Chinese foundation to build cross-border, people-to-people relationships in Africa, where it has helped build community-based hospitals. It has also provided humanitarian aid to disaster-stricken Indonesia, Kenya and Cambodia. It works with billionaires such as Cao Dewang, founder of the Fuyao Group, which manufactures glass for cars, who made a donation of US$33 million to CFPA to support drought relief in south-west China.

In his role at the China Foundation Center, Mr He initiated the Self-Regulation Alliance for Chinese Foundations; he was elected chair in August 2013. The 42 private and public foundations involved in the Alliance have pledged to disclose all information about donations received and grants made.

He Daofeng has also promoted media coverage of philanthropy, such as the story of a 90-year-old man who donated his savings to allow 100 students to finish high school. Finally, Mr He and his foundation are working with the World Food Programme and Tencent online donation platform to support a programme to provide rice for poor children in Cambodia.

He Daofeng’s work has been pivotal in helping to transform Chinese philanthropy into a more integral part of China’s social life, serving more effectively the needs of its beneficiaries.

[In his own words]
I was a farmer for many years, so I understood the plight of poor farmers. I was also a researcher looking at China’s rural reform in the 1980s and I saw that social reform was needed to underpin economic reform. After Tiananmen Square, I thought that it would be useless to push for political reform. Rather, we should promote philanthropy and cultivate social self-governance, the civil society spirit and citizen obligation. So social change was the industry sector I chose at that time.

Frankly, I don’t think I have had any major achievements, but I could say that I was the first volunteer leader of a GONGO that became a fully independent foundation, and this is an example for other GONGOs that want to go the same way. It was very difficult because we were breaking new ground. If I didn’t tread carefully, I felt it would incur the hostility of many parties, provoke a crisis for the whole sector, and maybe even put us in physical danger.

The next task is to guide CFPA to being a fully international foundation. We need more foundations on to the international stage because it will help the people of China to become more outward-looking.

I also want to promote more collaboration among Chinese foundations through the China Foundation Center and greater democratic self-governance – an imperative for Chinese society generally. CFPA also started a microfinance enterprise 18 years ago, which made small loans worth US$300 million to 180,000 rural women in 2013. Our goal is to raise that figure to a million women over the next five years. The problem is that I’m too old to do all of these things!

Chinese philanthropy needs two main things: first, legislation to encourage more GONGOs to become independent charities, like CFPA. Second, philanthropy needs to be modernized. We need legislation to create a more equal market environment. This will require the education and involvement of the younger generation in philanthropy, more people giving and more people working in the sector. It needs a great effort by one whole generation.