Meet Lucia Dellagnelo, of ICOM Brazil, another of this year’s Olga Prize finalists 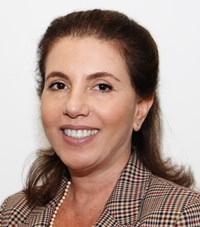 Lucia Dellagnelo is co-founder and chair of Instituto Comunitario Grande Florianopolis (ICOM), the first community foundation in south Brazil and only the second in Brazil (Instituto Rio being the first). ICOM is a pivotal organization in Florianopolis, stimulating a culture of giving to the non-profit sector which was largely absent before; bringing together representatives of the different sectors of the community; drawing attention to local needs; helping donors understand and support organizations to meet those needs; and acting as a local grantmaker. Since it began, ICOM has mobilized over US$2 million in donations, of which almost one third has gone to grants to local NGOs.

ICOM also supports local NGOs to become more strategic, more effective and more open. It undertakes a regular mapping of the local NGO sector and has launched a Portal of Transparency website, used by 181 organizations, to help improve NGO management and governance.

Following its establishment in 2005, Lucia served as the CEO of ICOM, and she has subsequently become chair of the board. She is also Vice Secretary of State for Sustainable Development in Santa Catarina state and has worked as technical adviser for the State Secretary of Education, developing partnerships with companies and non-profits to improve public education.

In her own words …
‘I’ve been involved in the social sector ever since I was 16 when I worked as a volunteer teacher in one of the shanty towns of Florianopolis. I was away from the city for 15 years studying and working and when I returned, I wanted to do something to make a real difference to the community. I’d come across the community foundation idea and was excited by it. I managed to communicate my enthusiasm to a group of other people who were active in the social sector and we decided to set up ICOM.

That was important. It meant that ICOM began as a shared vision with a group of people bringing their perspective and ideas to it, not just an NGO established and driven by one person. I think that’s the thing I’m most proud of: that all of the organization’s members bring the same passion and commitment to it and it feels like a genuine community organization.

Nevertheless, it was hard to get ICOM going. At first, it was just me and my computer in a room. I had to dedicate two years to it as a full-time volunteer, with no salary and no funding.

My biggest disappointment is that ICOM has not made a bigger difference to traditional giving habits in the city – though we are already seeing changes due to our work. I always appreciated that this would be a long process, but it’s taking longer than I expected.

But the organization is growing steadily. Our biggest asset at this point is credibility and trust, among both NGOs and donors. ICOM is already a reference point for everyone who wants to make a difference in the community, a place where they will automatically go for information and advice or to make contact with others.

But what I’d like to see more in the future is more strategic giving from individual donors in our community. We also want to be open to newer forms of philanthropy. Information technology is playing an increasingly important role, especially among the young, so we’ve set up Social Good Brazil to promote the use of technology for social change. I’m not very technologically adept, and it’s important that ICOM is much better than its founder in this respect!

I think there are two big obstacles to the development of Brazilian philanthropy. One is that giving by corporate foundations dominates and there is little tradition of individual giving to community organizations. The other is that social sector organizations need both greater visibility – much of the work they do is not seen – and a greater degree of public trust. That’s why ICOM started the Transparency Portal. It’s a platform where NGOs can show their work, where their funding comes from and what they do with it. At first, NGOs were reluctant to participate but now they are keen to be on it. And there are signs that it is having an effect. One or two large donors have said to us, “now that I know that particular organization is working with ICOM, I feel more confident about giving my money to them.”’

Lucia Dellagnelo is a great woman!!!