Meet Natalya Kaminarskaya of the Russian Donors Forum, another of this year’s Olga Prize finalists 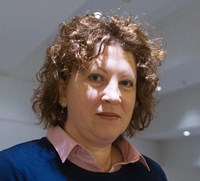 Natalya Kaminarskaya is executive director of the Russian Donors Forum, a coalition of donor organizations that brings together leading Russian and outside foundations and companies working in Russia. Under her leadership, the Forum has become an instrument for improving and extending the activities of Russian donors, highly respected both in Russia and internationally. It is helping to make Russian grantmakers’ practice more professional, more strategically oriented, better known and regarded. In a country where philanthropy is developing and where little infrastructure exists, its role is invaluable, both in supporting Russian donors and in serving as a conduit for the experience of countries where philanthropy is more established.

One of the most important roles Natalia and the Forum play is building awareness about foundations’ work in Russia, advocating for a better legal environment for giving, and promoting transparency and information sharing by donor organizations. One of the key achievements of the Donors Forum was building a community of endowed foundations in Russia. This began with advocating for an endowment law and continues through supporting a peer exchange platform and regular training events.

As well as working tirelessly to promote more and better philanthropy in Russia, Natalya was a driving force in the ‘Emerging Societies, Emerging Philanthropies’ Forum held in Peterhof, Russia last year.

In her own words…

‘I was working for CAF Russia when the new donors’ forum was launched. I was very enthusiastic about community foundations and thought the forum would be a good way to promote and support the model in Russia. I remember when I went to be interviewed for the coordinator’s job, I spent most of the time trying to convince the interviewers how important it was to support community foundations in Russia.

I think the fact that the Russian Donors Forum exists at all is a major achievement. It was built from scratch by foreign donors, but its members are now mainly Russian foundations and companies and it has become a valuable part of the country’s philanthropic infrastructure.

I thought when we started that the number of members would grow much more quickly than it has done. We had the good examples set by Potanin and Zimin, who were following the best standards set internationally, but not many followed suit. Compared to other countries, there are fewer foundations here. They are increasing but they are not necessarily in the public eye, so few people know about them.

We have just done our own internal strategic plan, and the main thing we identified was a need to carry out a major public relations campaign to publicize foundation activities and make them more widely understood. At the moment, philanthropy is seen as something that is done voluntarily and doesn’t need any infrastructure. We want to show how important infrastructure is and how foundations are the core of organized philanthropy, so we are going to hold a special European foundation day to promote them.

There are many challenges. In terms of the Forum, I have to combine the role of leader of the association and servant of the members. It’s easy when you have a well-established membership which comes up with great ideas and you work in synergy. But that’s not always the case. The personnel of foundations changes and foundations leave. Sometimes it seems you’re continually starting again. I would like the members to come up with a clearer vision of what the network can do for them.

There is still not enough information about philanthropy in Russia – data on things like the number of foundations or the number of donations is expensive and unreliable. But I would say that trust is still the number one issue. With the foreign agents’ law last year, philanthropic infrastructure is under attack. Neither the Russian public nor the government understand its importance and they don’t trust non-profits. As a result, corporate donors establish their own projects rather than working with non-profits, so everyone is starting from scratch, trying to do something that is already being done. Getting organizations to work together is a huge challenge both for the Forum and for Russian philanthropy.

Philanthropy is increasing; more people are doing it and see it as fun and satisfying. But we need more resources, more organizations and more infrastructure to support and encourage them. And above all we need more enthusiastic leaders.’