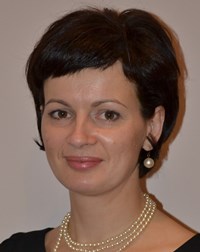 In 2003, Rūta Dimanta set up Foundation ‘Ziedot’ (donate),Latvia’s first internet giving portal . She is now chair of the board . In the ten years since it began, 12 million Lats (over €17 million) have been raised through ziedot.lv, almost entirely from indigenous sources – companies, individuals and local foundations. Prior to this, there was little local tradition of philanthropy and the Latvian NGO sector relied primarily on international donors. Under Rūta ‘s leadership, the Ziedot Foundation laid the groundwork for corporate and individual philanthropy in Latvia.

Rūta has worked with a number of businesses on setting up corporate foundations and charitable programmes. The Ziedot Foundation has also launched programmes for collecting donations of used clothes, shoes, household goods and food; it currently has 1,599 donation boxes all over Latvia for various charity causes. Perhaps its most striking initiative was setting up a food bank and a massive campaign ‘For a hunger-free Latvia’ (Paēdušai Latvia) at the height of the economic crisis in 2009. During the initial campaign, over 47,000 food parcels (over 768 tons of  food) were donated to families whose breadwinners had recently become unemployed.

No doubt one of the reasons for Ziedot’s success it that it has managed to enlist the support of the media. Throughout the Paēdušai Latvia campaign, for instance, over €1.5 million of free media advertisement was obtained.

Before she set up the Ziedot Foundation, Rūta Dimanta was adviser to the Latvian community foundation movement and deputy director of the Riga NGO Centre.

In her own words …

‘I had come across the work of NGOs when I was a student in the 1990s and I later worked for the State Bureau of Human Rights and the NGO support centre, so I had already had experience of working with NGOs when I created Ziedot.lv. And I’d had a wonderful teacher, Olga Alexeeva. I first met her when I was working for the NGO support centre. She was a consultant for the creation of Latvian community foundations, and she knew how to captivate, persuade and inspire.

Creating the Ziedot Foundation from scratch wasn’t easy, because there was practically no tradition of charity in Latvia, and trust in charity organizations was low. But in the 10 years that Ziedot.lv has been active, attitudes have changed, and donating to support common goals has become commonplace. People have begun to understand that giving can help solve some of the problems we face. The Ziedot Foundation has become the biggest charity organization in the country, collaborating with both central and local government as well as with other NGOs. Most of the €18 million we have raised has come from local people. That’s a considerable figure for a country with only 2 million inhabitants.

Our next step is a very immediate one: last November in Riga, the roof of a supermarket caved in and 54 people died. Ziedot.lv has been providing help and gathering donations. In two weeks €1.4 million was raised locally and internationally. Donations came from 20 countries.  The next step is to turn that money into purposeful help.

Many challenges remain, of course. One is leadership in situations where no one is sure how to act. At Ziedot, we tried to set an example during the recession, launching a campaign to solve the country’s food crisis. We got together voluntary helpers, an advertising agency, one of the biggest food shop chains in the country and TV to address people and companies. And it worked! Olga Alexeeva taught me that it is the responsibility of a charity to see the true needs of a society and to convince donors to help meet those needs.

Still, it’s disappointing that in the age of space flight and the discovery of the Higgs boson particle, we rely on philanthropy to meet basic human needs.’