As human rights and social justice funders, we try to reach those people who are most marginalized and excluded from services and protection. Those who are least empowered, least resilient, and hardest hit by inequality. But one group that ticks all those boxes is systematically excluded from funding opportunities: sex workers. Why are not more funders stepping into this gap? What makes even human rights funders so hesitant to take on the human rights of sex workers?

Many of the women, men and transgender people around the world who provide sexual services for money face high levels of violence, discrimination and incarceration. Due to the criminalized status of sex work in most countries, combined with high levels of stigma, sex workers are often unable to file a complaint or take legal action. Amnesty International just conducted research on human rights abuses against sex workers to better understand the appropriate, rights based actions that are needed. This has culminated in a global policy in support of decriminalization of sex work. There are other organisations that stand up for sex worker rights, including those led by the community themselves, but these organisations are systematically underfunded.

Funder journeys
The Red Umbrella Fund, the only international fund for and by sex workers, partnered with the Free University in Amsterdam to better understand how other allied funders started supporting sex workers’ rights. Sixteen staff were interviewed at twelve foundations to analyse key aspects of these funder journeys.

“I am very conscious of the fact that I did go on a journey. I did not start off talking about sex workers and sex worker rights and understanding the difference between trafficking and sex work. But yeah, I now see sex work as work. It needs to be work that is respected, that is protected, paid for properly. That has all the rights of other work.” (foundation staff, interview respondent)

What happened to bring about this change? And how can we reproduce such developments and scale them up? 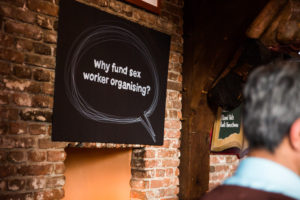 At a funder discussion at the EFC’s AGM 2016 (Credit: Clair Bontje/Mama Cash)

Yes, the respondents admitted, academic research was useful as evidence to support sex workers’ rights. And the various UN agreements (like from UNAIDS, UNDP and WHO) on sex work helped too. But there is one other ingredient that seems to be key to any significant change.

Polarised
Although everyone’s story is unique, the following excerpts from interviews with two women leaders in international foundations are exemplary of experiences and insights shared by many others in philanthropy. The fact that their stories are anonymized is illustrative of the sensitivity and high level of stigma that continues to be associated with sex work. Discussions related to sex work are regularly described as “extremely polarized” and “really unpleasant”.

“The debate is so polarized, where the violence against women on one lawn is basically accusing the other side of supporting the sex industry. And you’ve got groups [on the other side] that say there is no violence, that they have never come across a case of trafficking there. And because we can’t have a proper, honest debate about this, it’s like a zero sum game.”

Victims
The two foundation leaders cited in this article have a background in fighting violence against women and trafficking, which seemed to put them strictly on the one side of the debate.

“For me, sex work at that point was a bad thing done to women. I could only see it as oppression. It was a way to control women. It was harmful to women. And I was only really aware that it was about women. I saw it as violence against women.”

Seeing sex workers first and foremost as victims of violence had implications on the funding strategy they implemented at their respective foundations.

“I made a very quick jump between sex work – well, what I then called prostitution – and trafficking and I put the two together.”

This conflation between sex work and trafficking was reflected in the grantmaking by her foundation at the time, which mainly focused on ‘rescuing’ women from the sex industry:

“the majority of it was really funding those organizations that were trying to get women out of prostitution. That was how I saw it. We were quite proud of that. We thought it was doing good work.”

So what happened that made them recognize that sex workers are people with agency, entitled to human rights?

Sewing Machines
The game-changer for many of the respondents had been coming in direct contact with sex workers. Hearing first-hand experiences from sex workers and better understanding their contexts. And, importantly, seeing sex workers first as human beings. As people with agency.

“For me it was the meeting with the sex workers, hearing them talk about their work. [..] It was this great sense of these women having made informed decisions about going into this work, because whatever options they had involved very high levels of violence.”

Hearing directly from sex workers how they experienced their work, and learning about what they considered their key challenges and needs to be, were significant milestones in determining the direction of the funder’s journey.

“They talked about the economic alternatives that were presented to them by the state, by anti-prostitution groups, and saying: Well, actually I can triple this. If I really want to change the life of my kid, this is the most lucrative way for me to do it. If you want me leave sex work, come back and put me in charge of petrol pumps. Put me in charge of something that you would offer a man. Don’t offer me a sewing machine. Or doing handicraft. Because I will still be trapped in the same cycle of poverty and violence. [..] It certainly was a shift away from viewing women as victims, and seeing them as having agency, about making informed decisions, about becoming politicized”

In some cases there was no direct contact with sex workers, but other community members or experts functioned as the initial amplifier of the voices of sex workers, widening the funder’s horizon to explore alternatives and listen to the community.

“[They told me] we don’t agree with this [raid and rescue,] approach. They are in fact traumatizing women who are being so-called freed in raids and they are not providing them with alternatives, when they say they are.”

Fears
Both women leaders recognize now how they, and many women they encounter, transfer their own fears and feelings about what they think it would be like to do sex work onto others.

“It would be a problem for me, it will always be a problem for me, but that shouldn’t mean that it cannot not be a problem for other women. [..] But my concern as a feminist should be: does that woman have a voice, does she have rights? Is she able to live life on the terms that she wants? And if she is vulnerable to exploitation and violence, are there things we can do to reduce that? Or even better, to help her stand up for her rights [..] and be able to demand justice.”

Building more open spaces even among peers to talk about these experiences, fears and prejudices can help change the direction we are going in.

“I remember talking to the director of a grantee organisation saying: ‘the worst thing that I can imagine is doing sex work. And therefore, the worst thing I can imagine any woman doing is sex work.’ I remember her saying to me: ‘Do you sit here imagining what it might be like to be a brick-laborer? Or an agricultural worker? No.’

The thing about sex work and prostitution is, it becomes extremely personalized and people apply their own personal lens to it, in a way they might not to other forms of exploitative work. Or work. There are other forms of labour exploitation out there that are horrific, but they don’t seem to carry the same moral outrage as sex work does.”

Value added
We need more brave funders to step up and help fill the funding gap and also to speak out against prejudice, misinformation and ignorance as the consequences are real in the lives of sex workers.

“I am convinced that if sex workers can have more opportunity to speak for themselves, change would happen faster. [..] That’s where our added value can be. To support them.”