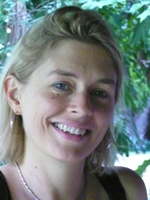 Well, I learnt something both interesting and depressing over my coffee and yoghurt at an excellent (and well-attended) early session this morning on Movements for Economic Justice.

Now, when I think Free Trade, I think bananas. But today I learnt from John Christensen of the Tax Justice Network that HALF the amount you or I might pay for bananas is made up of ‘value-added’ transactions (the insurance, the sticker and so on), which all occur in one off-shore tax haven or another. Value indeed: for the very few who are made very rich by these arrangements. Christensen’s comments focused on the damage caused by off-shore finance and, in particular, what amounts to almost a global conspiracy of tax avoidance by the wealthy and powerful worldwide. Another shocking slide not designed to help early morning digestion showed global banking flows into and out of Greece… Clustered threateningly around the dot that was Greece, was a tight circle of tax havens including the Virgin Islands, Cayman Islands, Jersey, Guernsey etc. Scary stuff…

And Christensen’s closing line? ‘In the modern world the nobles don’t have to change the laws to escape their responsibilities: they go offshore.’ And how many, one might add, go on to create foundations? Time for more coffee, definitely….