New research released today from the Center for Effective Philanthropy (CEP) suggests that there is significant room for foundations to improve when it comes to being transparent about how they assess their performance and share lessons learned. The report, Sharing What Matters: Foundation Transparency, finds that both foundations and grantees alike believe transparency about the substance of a foundation’s work, rather than about financial disclosures or governance, matters most to effectiveness. Foundations are most open about their grantmaking processes and their goals and strategies, but practice lags behind belief in other areas — they are not sharing much information, if any, on what has and has not worked in their efforts. As a result, both funders and grantees are missing opportunities to learn and improve. 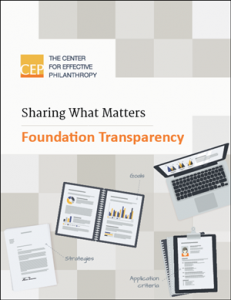 ‘We hope our research will help foundations to target their transparency efforts in areas that are really crucial to effectiveness rather than engaging in ‘checklist transparency’ that involves making public information of little value or relevance,’ said CEP President Phil Buchanan.

CEP analyzed survey data from 145 foundation CEOs and more than 15,000 grantees, as well as systematic reviews of more than 70 foundation websites. The analysis reveals that foundations see grantees and potential grantees as the primary audiences of their efforts to be transparent, and report being most open about their grantmaking processes and their goals and strategies. Almost three quarters of CEOs surveyed said they believe being transparent about the foundation’s goals could significantly increase the foundation’s ability to be effective, and 89 percent of foundation websites publish their programmatic goals.

‘Foundations are currently being transparent about some of the issues they believe help them to be effective organizations,’ said Ellie Buteau, CEP Vice President, Research, and one of the report’s co-authors. ‘They are not, however, currently sharing as much — or in some cases, anything — about what’s been working and not working in their efforts to achieve impact.’

The report shows that foundations are less transparent about performance assessment and lessons learned despite believing it would be beneficial to do so. Sixty-nine percent of foundation CEOs say being transparent about what has worked in its efforts could increase the effectiveness of their work to a significant extent, yet only 46 percent say their foundations are very or extremely transparent in this area. From the grantee perspective, grantees rate foundations’ levels of transparency lowest when it comes to sharing information about what has not worked in its grantmaking.

‘The topic of foundations not sharing what they are learning is not new, and there are a number of possibilities that may explain why this continues to be a problem,’ Buteau said. ‘For example, it might result from the challenge of doing foundation work in such a way that it is possible to identify successes and failures. If goals and strategies aren’t clear in the first place, it’s difficult to know how to gauge success.’