Philanthropy for Social Justice and Peace have released Individual giving in India, Russia, the Arab region and Brazil as part of PSJP’s Philanthropy Study. The current paper looks at individual giving by ordinary people in these countries and regions in more depth. 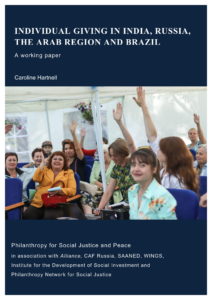 The report reveals that India and Russia are areas of great promise for individual giving, and at an earlier stage in Brazil. In the Arab region giving to the social sector is barely making headway, though traditional giving is very much alive. Previously the study has focused on producing a series of papers on philanthropy in India, Russia, the Arab region and Brazil. These studies have taken a broad view of philanthropy, encompassing everything from individual giving (by the very wealthy and by people of more modest means, including crowdfunding) to giving by private and corporate foundations, CSR, community philanthropy, social justice philanthropy, self-funded movements and impact investing.

The current paper looks at the development of individual giving with a special focus on some significant trends: crowdfunding and online giving, national giving days/weeks, fundraising by NGOs, and the causes that individual donors give to. It then goes on to look at the significance of the rise in individual giving; the role of technology in this; and finally the kinds of things that would enhance individual giving.

The paper draws on two sources. The first, different accounts of individual giving in these different places. The resulting paper was then shared with people from each country and region, mostly people who had contributed to the original studies, and then two webinars to discuss and expand on the findings.

The report is authored by Caroline Hartnell and published by PSJP in association with Alliance magazine, CAF Russia, Philanthropy Network for Social Justice (Rede de Filantropia Para a Justica Social), Institute for the Development of Social Investment (IDIS), SAANED and WINGS.