A new report from ILGA Europe – an organisation working for political, legal, and social change for equality for lesbian, gay, bisexual, trans and intersex people in Europe and Central Asia – has highlighted areas for philanthropy to focus on when it comes to funding LGBTI organisations across the region. 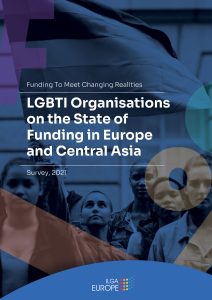 Barriers to funding remain consistent and reflect a lack of alignment between how funders articulate their priorities and what LGBTI organisations say they need, the report found. In 2021, many LGBTI organisations reported that funding opportunities do not support the types of activities they do, funders do not focus on the populations they serve, and funders require spending money in ways that prevent building up.

The report also found discrepancies across the region, with organisations in Central and West Asia and Southern Europe facing the most challenges in their activities, as well as a lack of funding.

This report ‘is an invitation to LGBTI activists, funders, and other supporters alike to reflect on today’s realities, and an encouragement to begin discussing what leaps forward need to happen to work towards sustainable and structural change’, said ILGA-Europe’s Evelyne Paradis, Björn van Roozendaal, and Nadzeya Husakouskaya.

For more information about Funding to Meet Changing Realities or to download the report, visit ilga-europe.org.