Philanthropy development and infrastructure body, The Worldwide Initiatives for Grantmaker Support (WINGS) has published a landmark report – The Global Landscape of Philanthropy – assessing trends and challenges within global philanthropy, and highlighting the full diversity of philanthropy. 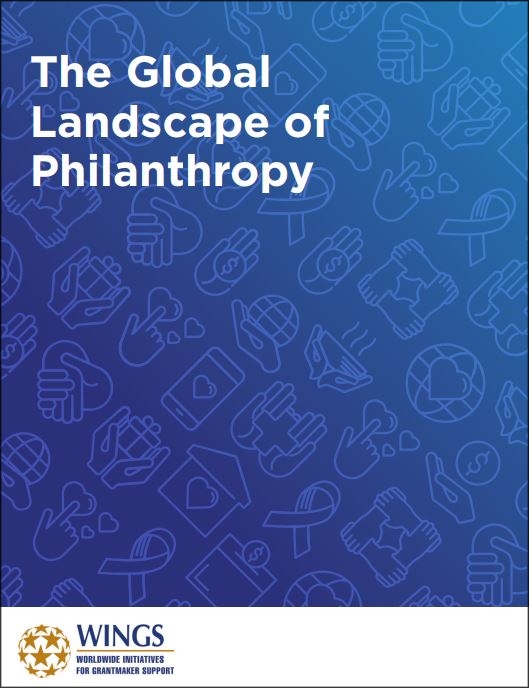 Written by Alliance associate editor, Andrew Milner, the report analyses the unique approaches to philanthropic giving, features segments on individual giving and offers comparisons with the giving of institutional foundations.

The research for the report is based on three main sources including twenty interviews with ‘practitioners or close observers of the philanthropy scene in different parts of the world,’ themed workshops in Johannesburg, Mexico City and Amman, and desk research on ‘published reports, articles and websites bearing on the general themes,’ the report says.

Individual giving
Looking at individual giving, the report demonstrates that it is increasing both by the very wealthy and people of more modest means.

Communication platforms and direct forms of giving have grown in popularity. New forms, such as online giving, crowdfunding and giving via text messaging or SMS, have created greater opportunities for individual giving even when people have less time for engagement.

The driving factors for Europe’s increase in foundations are the reduced amount of capital required to establish a foundation, as well as the decreased use of endowments, the report says.

The increase might also have demographic reasons; ‘families get smaller and people are more inclined to give a portion of their wealth to causes they are interested in.’

…and south
In the global south, the foundation sector has grown in various countries, such as China, India, Russia, Singapore and Pakistan. The increase of individual and corporate wealth in the global south is the primary reason for the growth of foundations.

‘Not only are the number of foundations in the global south increasing, but they are beginning to have larger ambitions,’ Jenny Hodgson, the Executive Director for the Global Fund for Community Foundations, said.

Roles and responsibilities
Looking at the role of institutional philanthropy, respondents from the report note four key roles—innovation, filling gaps, support for civil society and long term action. The report also states the importance of foundations’ willingness to take risks with their investments.

According to Danny Sriskandarajah, the Secretary General for CIVICUS, which promotes civil society worldwide, ‘institutional philanthropy’s main purpose is to support a diverse and resilient civil society both for itself and in order to serve those who are most marginalised in society.’

All for diversity
Diversity plays an essential part in institutional giving as well because of its role in civil society.

Barry Gaberman, the emeritus chair of WINGS and a former vice-president for the Ford Foundation, highlighted the necessity of civil society since ‘it proves another layer of institutions that safeguard against authoritarianism.’

He argues that ‘independent civil society is increasingly under threat from the encroachment of both governments and those same large operating charities.’

Foundations have a key role in acting for the long term in civil society and its people. ‘Foundations are thinking creatively about the way they can use their longer time horizon to best effect,’ noted Carol Mack, the CEO of the Association of Charitable Foundations.

An example of this is how ‘European foundations are increasingly supplying intellectual capital,’ according to Gerry Salole, the Chief Executive Office for the European Foundation Centre.

In terms of the topics that foundations support, they tend to be more ‘safe.’

‘All the statistics we have say that most funding goes to the safest areas—education, children, healthcare—not human rights, for example,’ Oksana Oracheva, the General Director of the Moscow-based Vladimir Potanin Foundation, said.

A subset of institutional giving includes community foundations, which have ‘adapted to local requirements and circumstances,’ meaning these foundations are committed to certain geographic areas and their local people and issues. Community foundations have developed in ‘unlikely areas,’ such as Russia; there are around 70 foundations established there in what the report describes as a ‘fairly inhospitable political climate.’

The Global Fund for Community Foundation’s Jenny Hodgson argues that community philanthropy ‘shouldn’t start with money, it should start with people, what they have and what they want to do, and what would make this happen.’

As for the future of foundations, the report includes both viewpoints on whether they will continue to grow.

In the UK, Carol Mack emphasises that ‘we’re seeing people choosing to fund through non-charitable vehicles – companies that decide to fund directly out of their CSR budget or the Mark Zuckerberg type donor, deciding to give as private individuals and not set up a foundation.’

However, she does not necessarily label this as a trend.

‘I don’t think the numbers are big enough to call it a trend but it’s something that’s been current for at least a decade.’

However, Barry Gaberman believes there will be an increase in the number of mega-foundations, such as Gates, Wellcome, La Caixa and IKEA.

Within the next decade or so, he thinks ‘that number of four will probably double.’