No Such Thing as a Free Gift

Linsey McGoey’s No Such Thing As A Free Gift is a timely look at the practice and meaning of global philanthropy.

The recent announcement that Mark Zuckerburg and Priscilla Chan will divest themselves of 99 per cent of their Facebook shares is just one of many examples of a turn to philanthropy to solve social and environmental problems. This movement is often called ‘philanthrocapitalism’, both by those sympathetic to it and those critical of it. Whichever way you slice it, it’s big business: Zuckerburg and Chan’s much-debated gift is worth around $45 billion at current prices, although some argue that it isn’t really a gift as the transfer is to a limited liability corporation (LLC) and not a charitable foundation. 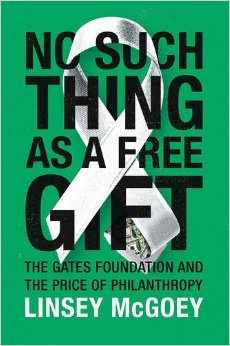 Dr Linsey McGoey, a sociologist at The University of Essex examines global philanthropy and the nature of these ‘gifts’. She proceeds mainly through an analysis of the activities of the Gates Foundation (perhaps the most famous charitable foundation of them all) in the fields of education and global public health. Written in an accessible style, and focusing on interviews with key figures at a variety of NGOs (some of whom remain anonymous), McGoey also runs through key background topics of international philanthropy.

Starting with the history of charity, McGoey delights in detailing the history of how Rockefeller and Carnegie accumulated their fortunes and sets this against their charitable deeds. She also discusses the economic theory that she sees lurking behind modern philanthrocapitalism—a bastardised version of Mandeville’s The Fable of the Bees (1705) that seems to derive progress from human vice rather than virtue—and provides a vivid portrait of some of the ideas circulating around a leading group of social entrepreneurs (who she terms ‘TED Heads’ due to their use of the TED platform to disseminate their ideas). Finally, she argues convincingly that it is mistaken to see philanthropy as independent from government in providing solutions to social problems. Rather, a whole set of governmental incentives, subsidies, and protections underlie philanthropy, both local and global.

One recurring theme in the book is that philanthropy exists as part of a social contract between societies and their members. Philanthropic activity is a good to be desired and so warrants tax incentives, but society also expects something to be gained from philanthropy that offsets the foregone tax. This raises a deep question about philanthropy today: should we expect philanthropy to be more accountable and transparent, seeing it as a public investment for which we should expect an adequate return? Extending the idea of foregone tax, should we think about whether charitable foundations have responsibilities to spend more of their assets and to show impact?

In one of the most interesting sections, McGoey begins to discuss what the philanthropic sector should look like. She argues that we should not only build a stronger evidence base on how much tax incentives affect charitable giving (donations to universities and cultural institutions in the US seems to be very sensitive to tax incentives, while religious giving does not); we should use that evidence to think about whether a donation to an already extremely wealthy institution (such as a rich university) should be subject to the same charitable deductions as a small operational charity. At the same time, philanthropy should be driven by greater attention to social need.  McGoey draws out an interesting point here in her discussion of global public health (specifically polio): disease eradication may be a priority for richer nations and foundations, but has much less of a positive impact than disease management, since it tends to focus resources on marginal cases.

McGoey clearly has an ear for a interesting quotation, and much of the argument involves her letting philanthropists and entrepreneurs speak for themselves, and counter posing this to the views of those working for international NGOs. This is well illustrated in the book’s opening quote from social historian, R. H. Tawney: ‘What thoughtful rich people call the problem of poverty, thoughtful poor people call… the problem of riches’

No Such Thing as a Free Gift: The Gates Foundation and the Price of Philanthropy by Linsey McGoey is published by Verso.  ISBN: 9781784780838

George Hoare is a consultant at NPC.