The Abu Dhabi campus of New York University (NYUAD) has launched the Strategic Philanthropy Initiative, the first academic and community-based platform that aims to shape a dynamic and strategic practice of philanthropy within the UAE as well as across the Gulf and wider Middle East and North Africa region.

The SPI was established through a multi-year framework agreement between NYUAD and Emirati businessman and philanthropist Badr Jafar, who will support this initiative throughout its formative years. 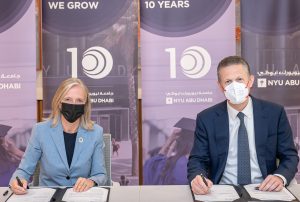 ‘Over the next decade alone, $3.9 trillion is estimated to be transferred to the next generation. This, coupled with the rise of young change-makers embracing purpose as a core driver of value creation, has the potential to lead us into a golden age of philanthropy. This is particularly true in the MENA region where 60 percent of the population is under the age of 25. Equipping our youth with the tools, resources, and infrastructure needed to boost impact using their time, talent and treasure is a massive and timely opportunity, and this collaboration with NYUAD is well-positioned to champion this cause and make a real difference,’ said Jafar.

While philanthropy is a long-standing practice in the Arab world, there are numerous factors that are said to be impeding advancement in the sector. According to the publication The State of Arab Philanthropy and the Case for Change, a deficit of data, transparency and accountability, and the lack of an enabling regulatory environment are all significant areas for improvement that will help enhance the growth and impact of the sector.

The Arab Giving Survey reported that 76 per cent of donors now require transparency on impact and evidence of how effective a charity is in achieving its goal. The survey also highlighted that 71 per cent of respondents would increase their donations with clearer reporting by the charities on how and where funds are spent

According to a recent survey by Alliance, 89 per cent of respondents believe that Africa and Asia, including the Middle East, will account for the most growth of its philanthropy sector over the next 25 years.

The SPI will be housed on the Abu Dhabi campus and is expected to convene regular gatherings in cities across the Gulf. The initiative is also likely to develop ties with other international institutions such as the University of Cambridge’s Centre for Strategic Philanthropy based at Judge Business School. Jafar is the founding patron of the Cambridge centre and host of the Business of Philanthropy series – a set of worldwide interviews with leading philanthropists and practitioners.