The Edhi Foundation, Pakistan’s largest charity, has urged its government to lift a ban on a number of international NGOs so they can help with relief efforts following catastrophic floods. 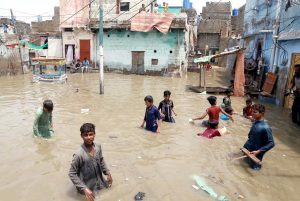 The government is struggling to respond to the current floods given their unprecedented magnitude.

Pakistan began a crackdown on international NGOs almost a decade ago, accusing them of ‘anti-state activities’ in Pakistan. By 2018, several of them had officially been asked to leave on the basis of new and stricter laws. International NGOs were active on the ground when Pakistan was hit by floods in 2010 and a devastating earthquake in 2005 and played an important role in relief and rehabilitation work.

Faisal Edhi, CEO of the Edhi Foundation, says international NGOs should be allowed to return, given the situation, which he described as ‘grim’.

One of the highest profile NGOs banned and expelled was Save The Children, which the government said was linked to a Pakistani doctor recruited by the CIA to help in the hunt that led to the killing of Osama bin Laden in Abbottabad.

Save the Children, which had been operating in Pakistan for 35 years, denied any involvement and the ban was later reversed. The organisation is currently active on the ground in the flood-affected areas, it says.