A former US ambassador to South Africa, is to succeed Chris Stone as President of the Open Society Foundations (OSF), with effect from 1 January 2018. 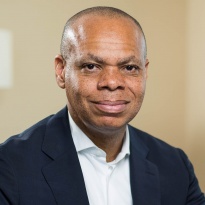 Patrick Gaspard will become the head of what is now the second-largest philanthropic organisation in the US, following George Soros’ transfer of $18bn to OSF, announced in October. He brings to the role a formidable track record as high-level public servant and political organiser.

According to an OSF press release, as Ambassador, he worked in partnership with the South African government to develop the country’s healthcare infrastructure, support innovations in local governance, develop clean, renewable and efficient energy technologies, and end wildlife trafficking.

Prior to his ambassadorship, he was Executive Director of the Democratic National Committee, overseeing efforts to re-elect Barack Obama and Director of the White House Office of Political Affairs.

He is not the first ex-Obama official to move to the upper echelons of the foundation world. Earlier this year, former Administrator of USAID, Rajiv Shah succeeded Judith Rodin as President of the Rockefeller Foundation. Other notable transitions from the pubic sector to philanthropy include Jonathan Pershing, now Environment Program Director at the Hewlett Foundation, who previously served as a US Special Envoy for Climate Change.